This could be revolutionary considering less than half of those affected receive formal medical treatment.

This article looks at what foods and nutrients may help, particularly for dealing with major depression. 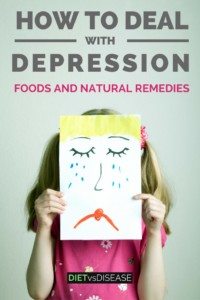 Typical symptoms include sadness, anxiety, loss of appetite, low mood, and lack of interest in previously pleasurable activities. The severity of these symptoms determines how the depression is categorised.

This condition is what most are referring to when speaking of depression, and will now be referred to as depression in this article. This is a nice introductory video:

Unfortunately depression is becoming increasingly common, with women more likely to be diagnosed than men. However, instances of suicide is far greater in men (1, 2).

Scientists have long thought depression was simply a chemical imbalance in the brain, or something that was strictly emotionally-rooted. But the cause is much more complex, and is likely a combination of genetic, psychological, physiological and inflammatory factors.

The newly discovered link between depression and low-grade inflammation is of particular interest, especially from a nutrition perspective (3).

Summary: Depression is a complex mental health disorder, known as Major Depressive Disorder if symptoms are long-term. It’s thought to be caused by a complex combination of factors. 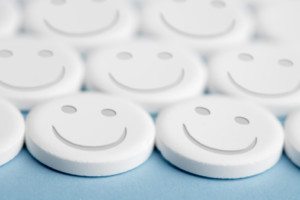 Although not perfect, pharmaceutical medications are usually fundamental for treating severe depression.

The most common are antidepressants like SSRIs (selective serotonin reuptake inhibitors) and TCAs (tricyclic antidepressants), as well as NSAIDs (non-steroidal anti-inflammatories).

You should certainly not stop taking your medications without first speaking with your doctor.

However, new research indicates certain dietary changes may be effective alongside medical treatment. Specifically, some forms of nutrition supplementation appear to improve the effectiveness of antidepressants.

This could also have implications for treating children and adolescents, as well as milder forms of depression, where antidepressants are not always suitable.

Summary: Severe depression is primarily treated with medications, and they are still important.

Of the research into depression and diet, very few studies have investigated how overall dietary patterns influence depression.

Diets high in fruits and vegetables and fish (characteristic of the Mediterranean diet) are linked to the lowest risk of depression. However all the evidence is observational, which does not allow researchers to make strong conclusions (4, 5, 6).

Therefore at this point there is no specific diet or eating pattern proven to treat depression.

Just eat a lot of fruits, vegetables and fish, and make sure you follow an eating pattern you can stick to for 1-2 years at the very least.

Summary: There is currently no particular eating pattern shown to benefit depression, at least from a scientific standpoint.

Most research into natural remedies for depression has looked at isolated nutrients in the form of supplements.

Some are extremely promising, particularly when used alongside medications and formal therapy.

As always, speak with your doctor before trying anything new. There are some “natural” supplements, such as modafinil which may even cause depression, so not all natural supplements are safe to take.

St. John’s Wort is a medicinal herb with powerful anti-inflammatory and antidepressant properties.

It’s actually odd this is not more well-known and appreciated.

The caveat is that St. John’s Wort should not be taken alongside antidepressants. This is because it’s known to interact with many medications, particularly those for serotonin signalling in the brain (8, 9).

Therefore it’s more of a potential alternative to antidepressants, rather than a complementary treatment.

The majority of studies used dosages of around 900 mg daily, which should be split into three 300 mg doses.

Zinc is an essential mineral that appears to interact with neurons in the brain.

Those with depression tend to have lower zinc levels than normal (10).

Studies show that zinc supplementation alongside antidepressants can help reduce depressive symptoms in as little as 12 weeks (11).

In fact, zinc therapy on its own may even improve symptoms, at least in overweight/obese people with depression (12).

It seems an elemental zinc dosage of 25 – 30 mg per day is best. That is equivalent to supplementing either:

It’s also recommended to eat a variety of zinc-rich foods including:

Fish oil pills and liquids are made from fats (oils) of fatty fish species like mackerel, salmon and tuna. They’re rich in healthy omega-3 fats, specifically DHA and EPA.

Large review studies consistently find that fish oil, especially EPA, is useful in treating severe depression. It seems to improve the effectiveness of antidepressants by up to 30% (13, 14, 15).

The evidence is less conclusive among cases of minor depression (16, 17).

The effective dosage is thought to be up to 2,200 mg daily of EPA. This is high and must be supplemented, although eating fatty fish itself is strongly recommended too.

Creatine is a molecule that helps provide energy to all cells in the body, including the brain.

It’s one of the safest and most well-researched supplements around, most commonly used by athletes to improve physical performance.

It also appears to be a promising antidepressant in humans, but research in this area is new (18, 19, 20).

One well-designed study was able to match the efficacy of SSRI antidepressants after just 2 weeks of creatine supplementation in women with major depression (21).

It’s suspected that creatine is more useful in women as they tend to have lower levels than men. Just note it does cause additional water retention, which leads to slight weight gain.

At least 5 grams per day appears to be the most effective dosage. 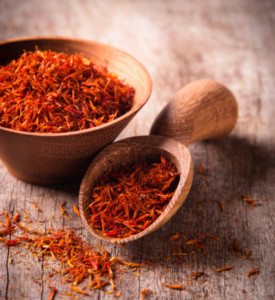 Saffron is the world’s most expensive spice.

But there have been several well-designed studies using it to help treat depression or minimise the side effects of antidepressants (22, 23, 24).

In fact, two studies of depression patients found that both saffron extract and saffron petal extract performed equally to an SSRI (fluoxetine) in reducing depressive symptoms (25, 26).

Saffron is best taken twice daily in 15 mg doses. A more inexpensive method is to use saffron petal extract (instead of the regular stem).

There are numerous other nutrients and supplements linked to depression treatment.

However they are either less effective or backed by fewer well-designed studies.

These include folate (if you have deficiency or severe MTHFR mutation), vitamin D (if you are deficient), red clover extract, chromium, inositol, vitamin B12, selenium and rhodiola rosea.

Summary: St. John’s Wort appears to be a useful alternative for those unwilling or unable to use regular antidepressants. Zinc and fish oil supplementation seem to enhance the effectiveness of antidepressants, while creatine and saffron may also be effective.

Although antidepressants and supplements help to manage symptoms of depression, do they treat the cause?

But SSRIs, for example, do not correct any underlying problem. Many argue they are simply a band-aid treatment, which is why they don’t work for all patients.

An emerging theory is that the balance of our gut bacteria (microbiota) largely influences brain development, mood and behaviour. Therefore, our gut health should be the primary focus of depression treatment.

In fact, only about 10% of the chemical serotonin – the “happy hormone” – is actually made in the brain. This is the chemical that SSRI antidepressants are designed to amplify.

Bacteria can communicate with the brain via activating neural pathways and central nervous system signaling systems. This is known as the Gut-Brain Axis, and seems to be influenced by low-grade inflammation in the gut (3, 27, 28, 29). 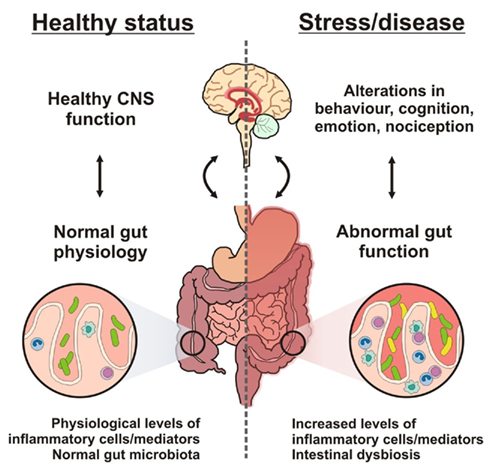 In one study, just by examining the bacteria from fecal swabs, researchers were able to determine the patients with and without depression with at least 97% accuracy (30).

Researchers are also able to alter the mental health and behaviour of rodents with fecal transplants or even probiotic supplementation (31, 32).

These so-called “Psychobiotics” could one day be the primary form of depression treatment. But I don’t yet feel comfortable recommending probiotics as a reliable option until more is understood.

As you can see, addressing any imbalances or intentionally “tweaking” the microbiota opens a whole new channel for interacting with the brain. It puts nutrition and diet at the forefront of physiologically treating depression, at least, theoretically.

Summary: The balance of our gut bacteria (microbiota) appears to influence brain health and behaviour via the Gut-Brain Axis. Altering or correcting any imbalances with diet could help treat some causes of depression, at least in theory.

To summarise the above recommendations:

Of course treating depression is multifactorial, with diet only one (giant) piece of the puzzle.

Don’t Deal With Depression On Your Own

You don’t have to deal with depression alone.

In most instances speaking with others who understand how you feel can be a tremendous help. Whether that is talking with a mental health care professional, or with peers who feel the same way as you.

An informal starting point to express yourself and ask questions (where you can remain anonymous) is this reddit forum. 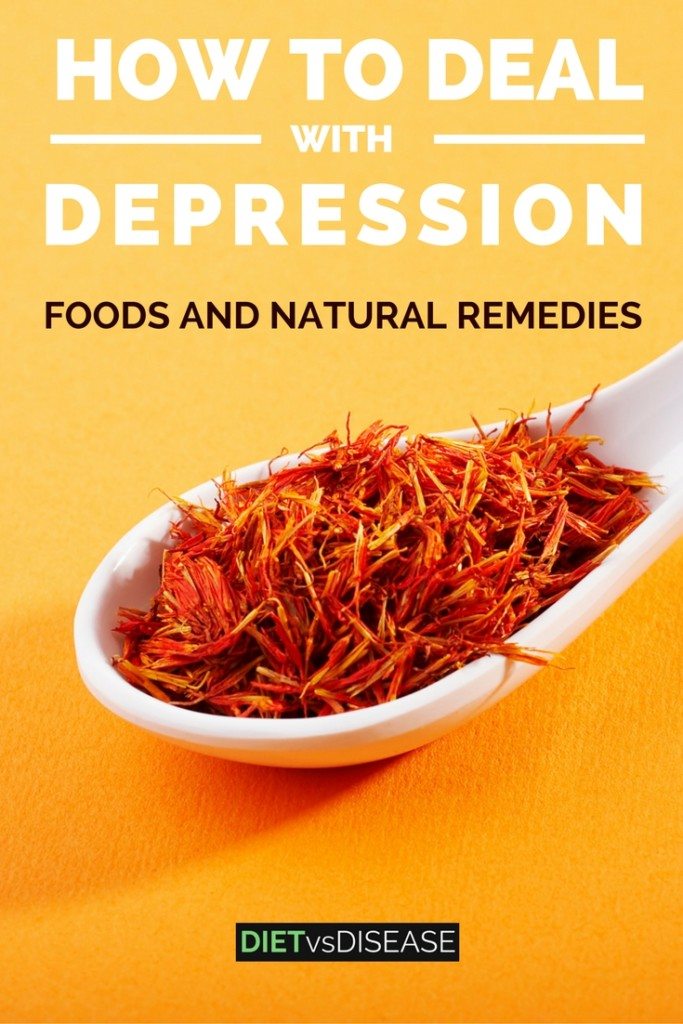