We have been raised to think all bacteria is bad.

However, exposure to a diverse bacterial ecosystem can actually be good for you.

Research into our own bacteria – particularly those living in our gut – has found that these microorganisms strongly influence many aspects of our health. 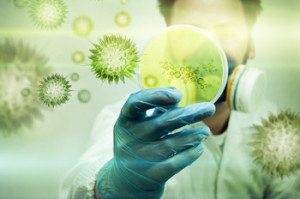 The World Health Organization defines probiotics as “live micro-organisms which, when administered in adequate amounts, confer a health beneﬁt on the host”.

In other words, probiotics are microscopic bacteria that we eat specifically for health benefits.

To put this into context, the human body is believed to carry around 100 trillion microorganisms in the intestines; ten times more than the total number of human cells (1).

These microorganisms – or bacteria – form what’s known as your gut flora or gut microbiota.

When the balance between good and bad gut bacteria is disturbed, significant health problems can occur.

Antibiotics (the opposite of probiotics) are the obvious example, used to fight bacterial infections. They kill or inhibit the growth of all bacteria, not just the harmful types.

That’s why long-term antibiotic use is problematic and leads to serious health problems (2).

Probiotics, on the other hand, help to restore and maintain the balance of bacteria in the gut. This restores health as a result, particularly digestive health.

Summary:  Probiotics is the term given to bacteria we eat specifically for health benefits. They help to restore and maintain the balance of bacteria in the gut. If that balance is disturbed, health problems can occur. 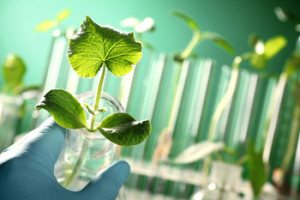 Gut bacteria live harmoniously in the body, forming a type of internal ecosystem.

Together as a community, it’s said these bacteria act like an extra “organ”.

This “organ” is thought to have an influential role on the progression of numerous common diseases and metabolic disorders, including high cholesterol and obesity.

Plants and insects provide fascinating examples of how necessary and influential bacteria is for living organisms to function.

Many insect species require gut bacteria to create proteins and vitamins they don’t get from their diet. Similarly, plants are only able to absorb nitrogen (essential nutrient for plant growth) because of the bacteria in their roots. (Hat-tip to Professor Jonathan Eisen for these examples on The Tim Ferriss Show).

Imbalances of the gut bacterial community 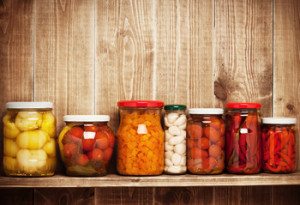 As with all other organs and cells in the body, the gut bacteria is far from a static environment (3).

It can be changed and manipulated by many factors… diet and dietary components the main one.

An imbalance of the bacterial community in the gut – known medically as gut dysbiosis –  appears to influence weight management, but we still don’t understand how.

Minimising low-grade inflammation, one of the main drivers behind metabolic disease, is the primary suspect (4, 5, 6, 7, 8).

Numerous researchers have since found unmistakable differences between the gut microbiome of lean and obese individuals (10, 11, 12).

This prompted studies into which species of bacteria were actively playing a part.

Analysis of faecal samples suggests that relative proportions of Firmicutes and Bacteroidetes – both phylums (or “classes”) of bacteria – are important in energy balance (9, 13, 14).

We know that changes in energy balance cause changes in weight, but these findings suggest it’s not nearly as simple as “calories in calories out”.

Some probiotic supplements claim to aid in weight loss, however the evidence for these particular supplements is currently lacking.

Fortunately, there is now research looking at how much control we have in this situation. Could probiotics – the ‘beneficial’ bacteria we eat for health – unlock the cure for obesity?

Summary: Gut bacteria is an internal ecosystem that helps your body to function. It’s strongly affected and influenced by dietary factors, which can then impact energy balance and weight gain. ‘Good’ bacteria is thought to work by reducing low-grade inflammation in the cells.

The research on probiotics and weight loss 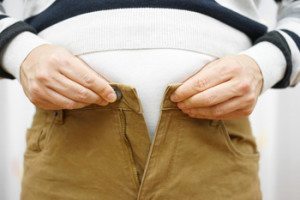 Lactobacillus and Bifidobacterium are the probiotic strains typically consumed by humans. They are all ‘classified’ as Firmicutes, mentioned above.

The problem is that diverse species of Lactobacillus and Bifidobacterium appear to have different effects on different people. Especially when it comes to weight gain and fat mass.

Many researchers debate the current evidence, making the whole area of research rather confusing (15, 16).

Based on the findings from previous clinical trials, a 2014 Dutch review study highlighted which specific strands of Lactobacillus and Bifidobacterium have some evidence to support weight loss claims.

The authors went on to say that lactobacillus fermentum and lactobacillus ingluviei were linked with remarkable weight gain, at least in animal studies.

Notably, they couldn’t find any significant or consistent effects of Lactobacillus rhamnosus, which contradicts findings from the Dutch review.

One of the latest controlled trial in humans was also promising.

For this study 20 participants (non-obese males aged 18-30) were given a strict high-calorie diet (an additional 1000 calories per day) for 4 weeks in order to make them gain fat. Participants were also randomized to receive either a probiotic supplement (VSL#3) or placebo (pretend supplement) daily to compare the effects.

Probiotic supplementation appeared to provide some “protection” from body mass gain and fat mass gain, as shown by this study diagram (21). 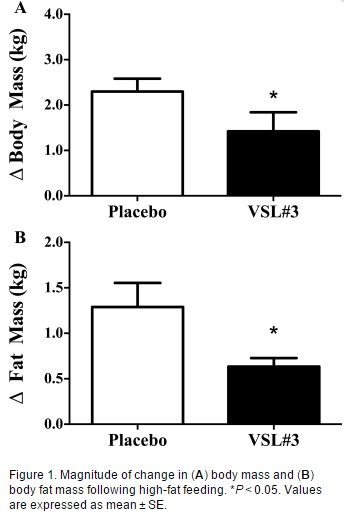 Note that the study was funded by the supplement manufacturer, so I wouldn’t quote it as conclusive evidence just yet.

Summary: Only a handful of human clinical trials on probiotic use have been published so far. Lactobacillus and Bifidobacterium are the probiotic strains typically consumed by humans. Some species appear to have anti-obesity effects, while others are linked to weight gain. 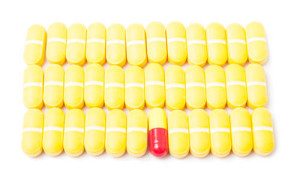 From the weight of evidence currently available, Lactobacillus gasseri appears to be the probiotic strain that can best assist weight loss in humans.

It’s most commonly found in the digestive tract, but is also common in the vaginal tract of all places… It protects the area from infections.

A 2015 Japanese study of thirty healthy individuals was one of the first controlled trials in humans to look at Lactobacillus gasseri specifically.

Researchers prepared two different batches of fermented milk: the active milk with Lactobacillus gasseri, the control milk without. Both milk preparations were equivalent in energy (146.4 kJ), protein (3.7 g), fat (0.1 g), carbohydrate (4.9 g), and sodium content (40 mg) per 100 g and were indistinguishable in taste.

Fecal samples taken at the beginning and end of trial showed that the Lactobacillus gasseri group had an increased amount of fat excreted in their feces after 2-weeks of consuming the milk. The control group saw no changes in fecal fat excretion after the same time period (19).

The researchers suggest that Lactobacillus gasseri suppresses dietary fat absorption in the small intestine, therefore also inhibiting calories taken in. Note that the change was statistically significant, but not significant enough that you would notice your waistline was slimmer.

This particular probiotic strain is also linked to health benefits for a range of other health aspects including high cholesterol, respiratory health and menstrual pain. But I’m not getting too excited… many “experts” out there are undeniably overselling the microbiome to make a dollar.

Just remember this is still a very new area of research. There are several glaring gaps in our understanding; namely how influential they are, probiotic interactions, the ideal dose and duration of use, as well as the safety and effects of long-term use.

These are only now being better-explored in human trials. If anything, we are the trial generation.

Summary: Lactobacillus gasseri has shown promise as a minor weight loss probiotic strain in several human trials. Note that the weight loss is statistically significant, but still very minuscule in the grand scheme. 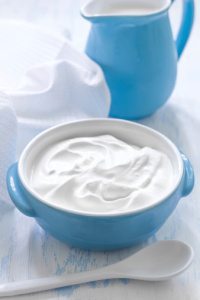 Lactobacillus gasseri is found naturally in most fermented foods.

Fermentation is the process of producing or preserving foods using bacteria to break down sugars and many naturally-occurring anti-nutrients.

Sounds complicated, but it’s much more common than you think. Your favourite coffees, chocolates, and even cheeses are all products of fermentation.

Lactic acid fermentation is considered the most ‘healthful’ type, and typically uses Lactobacillus bacteria to fuel the process.

Eating more quark, yoghurt and pickled vegetables such as sauerkraut will boost your intake of many Lactobacillus species.

Products fermented with vinegar (known as acetic acid fermentation) can also be beneficial, but it depends on how it was made. For example, raw vinegar such as apple cider vinegar still contain probiotics. The vinegar in most store-bought products, however, have usually had the bacteria pasteurised and filtered in order to prevent them breaking down into carbon dioxide and water.

While fermented meats like salami and chorizo are also an option, they’re not the best preference from a health perspective. Any probiotic benefits would be outweighed by negative health aspects… the extra calories and sodium, for example.

You can also ferment foods yourself at home, but be sure to do it properly. I recommend starting with these recipes for kefir, kimchi or sauerkraut.

Lactobacillus gasseri is also found naturally in breast milk, which is thought to help the development of an infant’s immune system.

If you do choose this option, I’d go for supplements that only contain Lactobacillus gasseri, and no other probiotic strains.

A well-respected brand is available on Amazon here (disclosure: this is an affiliate link).

Summary: Lactobacillus gasseri is found naturally in fermented foods such as quark and pickled vegetables. Supplements are available, however there is still much we don’t know about their use.

Overall there is certainly a telling link between our gut bacteria, probiotics and weight loss.

In theory the probiotic strain Lactobacillus gasseri may assist in weight loss if you already live a healthy lifestyle and cannot shed those stubborn final few pounds. Just note that the effects observed in clinical trials so far are very minuscule in the grand scheme of things.

While increased fat excretion is the mechanism that has been tested, I suspect the more meaningful influence has more to do with probiotics shifting the entire balance of bacteria in the gut. Again, we are waiting on more research to be published..

Fermented foods are your best natural source of Lactobacillus gasseri, and it’s safe to say we should all be consuming more of them.

Lactobacillus gasseri supplements could be a useful alternative too, available on Amazon here (disclosure: this is an affiliate link). Just remember that we don’t know the effects of long-term use.

And as with anything weight loss related, don’t expect any miracles without a nutritious diet and regular exercise. 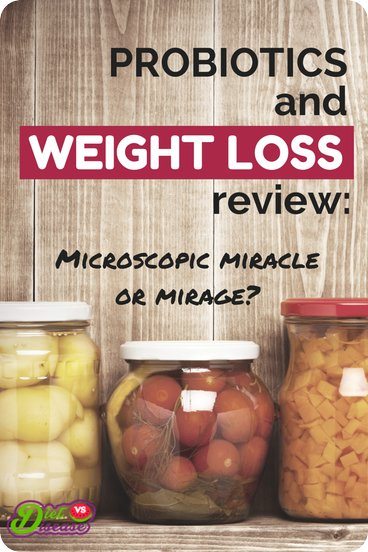