For some, however, excessive gas can be embarrassing or uncomfortable.

This article explores why some people fart so much and how to reduce excessive gas. Approximately 75% of intestinal gas, known medically as flatulence, comes from fermentation of undigested foods in the gut (1).

That is, when gut bacteria “feed” on undigested food particles in the large intestine. Gas is a natural by-product of that process.

There are two major factors that determine how much gas is produced:

2. Balance of Gut Bacteria: Imbalances in gut bacteria have been shown to cause more frequent and odorous flatulence (3, 4).

Why Do I Fart So Much? Some may feel they fart excessively, but the average healthy adult farts up to 25 times per day, expelling up to 700 ml of intestinal gas (5).

In saying that, it’s possible to produce a normal amount of gas and still have uncomfortable symptoms. Research suggests some people are more sensitive to the feeling of gas in the rectum (6).

Why Do Some Farts Smell So Bad?

Nearly 99% of the volume of a fart includes nitrogen, carbon dioxide, hydrogen, oxygen, and methane.

None of these gases are odorous.

The odor comes from sulfuric compounds, and especially hydrogen sulphide. These gases make up the remaining 1% volume of a fart but are very potent and can be smelled in even small amounts (7).

All sulfur in the body comes from food, especially from protein-rich foods. For this reason, people complaining of bothersome gas often find relief with diet changes (8, 9).

No scientific studies have examined whether a lower sulfur diet is beneficial, but a food symptom journal can help you to identify foods that may increase odor.

Summary: Farting is caused mostly by fermentation of undigested food in the gut. Foul-smelling farts are caused by changes in the composition of intestinal gases, and specifically intake of sulfuric compounds.

Flatulence is one of the most common symptoms, with FODMAPs the most common culprits. Those with IBS have large quantities of FODMAPs reach the gut, where bacteria ferment them to cause excessive gas (10).

Note that reducing FODMAPs may also help minimize gas in those who don’t have IBS.

As bacterial fermentation in the gut is a key cause of gas, and because FODMAPs are fermented more rapidly than other foods, trialling a low FODMAP diet makes sense for those with troublesome gas.

Learn more about removing FODMAPs from your diet, or try some low FODMAP recipes.

Summary: IBS is a common cause of excessive flatulence as FODMAP intolerance increases gas production. A low FODMAP diet trial or a food and symptom journal may be beneficial for those who fart a lot.

Do Probiotics Cause Gas? 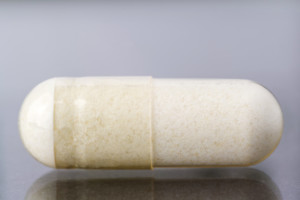 Probiotics are beneficial bacteria that occur in certain foods and supplements.

Studies have shown certain strains to be effective in reducing flatulence.

In one recent clinical trial:

After 60 days of treatment, 66-78% of patients in groups 1 and 2 reported improvement in flatulence. Interestingly, these positive changes persisted even 30 days beyond the end of the treatment period (18). Percentage of patients that reported improvements in IBS symptoms, including flatulence, after 60 days of treatment. The patterned bars represent treatment groups (F_1 and F_2), while the plain white boxes represent placebo (F_3). A higher score is better. Click to enlarge. Percentage of patients that reported improvements in IBS symptoms, including flatulence, 30 days after stopping treatment. A higher score is better. Click to enlarge.

No significant differences were reported between the two different probiotic preparations.

Small studies have also found the probiotic preparation VSL#3 to be much better than placebo in reducing flatulence for those with IBS (19).

Just note that probiotics may not be for everyone though.

Some patients have reported probiotics caused minor gastrointestinal distress, including increased gas, especially in the first weeks of taking them (20).

This makes sense as for some they could alter the balance of gut bacteria in an unfavorable way. Ask your doctor if a trial of probiotics is appropriate for you.

Summary: Imbalances in gut bacteria may lead to increased gas and greater sensitivity to gas in the rectum. Certain strains of probiotics have been shown to be helpful in reducing flatulence in those with IBS. The first action for reducing gas should be to identify problem foods.

But certain behaviors are thought to worsen flatulence. In some cases, simple lifestyle changes may bring relief.

This happens for two main reasons. First, stress alters the composition of the gut bacteria. This interaction is known as the gut-brain axis (22). Second, stress has been shown to affect food choices, including types and amounts of food eaten. You’re less likely to make healthy food choices when you’re stressed, and this may affect function of the digestive tract (23).

It’s important to look for ways to reduce daily stress if you’re prone to gas and related symptoms.

In one small study, 30 minutes of meditation per day for two weeks significantly reduced flatulence and belching. Interestingly, these benefits were seen even one year later (24, 25).

There are several free guided meditation apps, including Headspace, Calm, and Insight Timer.

First, bacteria ferment undigested food matter for as long as its in the intestines. When the intestines are full of stool due to constipation, there’s a great deal of fuel available to feed gut bacteria.

Second, stools can make it more difficult to pass gas causing it to build up in the large intestine (26).

Attempt to move your bowels when you first feel the urge. Here are some tips that can help. Online reports and patient testimonials claim that various supplements can help with gas.

Research is fairly limited on these products.

Activated charcoal is a natural treatment made from coconut shells, coal, or wood.

Charcoal underpants and cushions have even been developed to help neutralize sulfuric gas smells, although they’re not usually effective (27 , 28 , 29).

Small animal studies have found activated charcoal supplements to reduce the volume of hydrogen sulphide gas expelled through the rectum. The effects were even greater when activated charcoal was combined with Yucca schidigara and zinc acetate (30).

Unfortunately, human studies have not always found them to be effective (31, 32).

For this reason activated charcoal supplements aren’t recommended unless they’re prescribed by a doctor.

Digestive enzymes are chemicals made in the body that help with digestion.

Identifying and eliminating problem foods is the preferred first line of treatment. But digestive enzyme supplements taken with meals may help when elimination diets aren’t possible.

Simethicone is a medication that makes it easier for gas to leave the body.

It’s available over-the-counter in pill form or as liquid droplets.

Studies show that simethicone is not effective in reducing gas volume. If anything, it may make you fart more because it allows for small gas bubbles to exit the body more easily (37).

If your main complaint is gas pains or feelings of trapped gas, ask your doctor if simethicone might be appropriate for you.

Summary: The strongest evidence for supplement use indicates digestive enzymes can help those who have trouble digesting lactose or oligosaccharides. Evidence is mixed regarding activated charcoal, while simethicone may actually increase flatulence.

Don’t Fart Around Any Longer

Most farting is the result of fermentation of undigested foods in the gut.

To recap what was covered:

See your doctor if these changes don’t help, or if you have persistent gas that’s accompanied by other symptoms like bloody stools, persistent diarrhea or chronic constipation.