There’s a lot of misinformation online about treating Crohn’s disease.

Unlike the low FODMAP diet for IBS, there is no proven diet or cure for Crohn’s.

However, studies show certain diet changes may help with treatment and preventing recurrence.

This article takes a science-based look at what might actually work.

What is Crohn’s Disease?

Crohn’s disease (CD) is a common inflammatory disorder of the gut.

Alongside ulcerative colitis and microscopic colitis, it’s classified as an inflammatory bowel disease (IBD). Together, IBD affects over 1.4 million people in the US and 2.2 million in Europe (1).

Crohn’s disease is characterized by inflamed sections of the intestine. However, it can affect all parts of the gastrointestinal tract, from the mouth to the anus.

This short video explains it in more detail:

Summary: Crohn’s disease is a form of inflammatory bowel disease (IBD), characterized by inflamed and damaged sections of the intestine.

Crohn’s disease is thought to be caused by a combination of genetic, environmental and immunological factors.

These stressors appear to alter the immune response to bacteria in the intestines. This leads to inflammation and ulceration.

As a result, the most common symptoms of Crohn’s disease are:

Some researchers believe the typical “Western” diet is the reason rates of Crohn’s disease and other gastrointestinal problems are on the rise (4).

That is, an eating pattern high in unhealthy fats, sucrose, processed foods and carbs, and low in fruits and vegetables.

Summary: It appears to be caused by a combination of genetic and environmental factors, though the role of diet is uncertain. Symptoms of Crohn’s disease are typically digestive issues coupled with fatigue and weight loss.

Flare-Ups Are Treated In the Hospital

Patients are usually hospitalized during the acute phase or “flare-up” of Crohn’s disease.

Successful treatment sometimes requires surgery, but always includes medications (such as prednisolone) and several days of bowel rest. This allows the digestive tract time to heal.

Rather than eating food, a patient receives 100% of their calories and nutrients through a feeding tube into the small intestine. This is known as enteral nutrition and is especially useful when treating children (5, 6).

Patients then move into remission (no symptoms), which is when our diet and lifestyle changes come into play. This diagram illustrates the process (7): 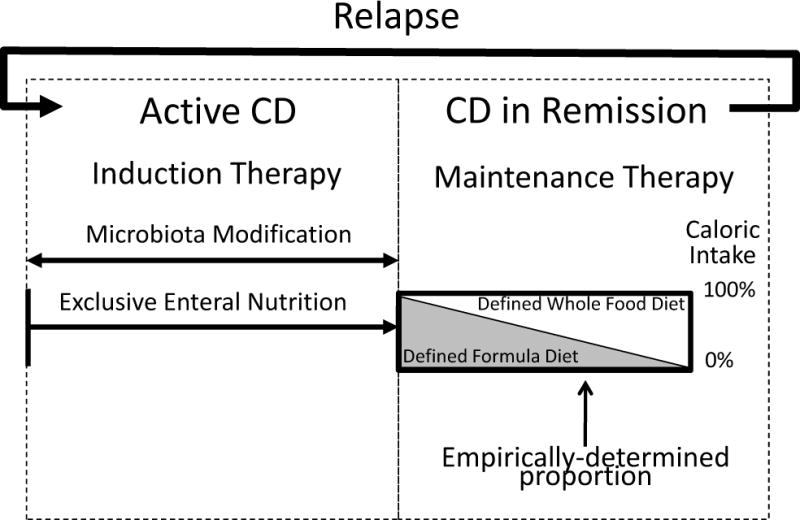 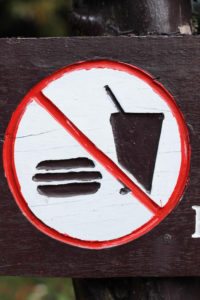 Although diet may not be a direct cause of Crohn’s disease, it plays a critical role in managing symptoms and preventing recurrence.

This means diet changes are the closest you can get to a “cure.”

Diets that restrict or eliminate foods have become popular for those with Crohn’s, with some limited evidence to support the concept (8).

A low-residue diet limits specific high-fiber foods that add residue to the stool, like whole-grain breads and cereals, nuts and seeds, and fruits and vegetables.

According to the Crohn’s and Colitis Foundation of America (CCFA), two-thirds of people with Crohn’s – who experience abdominal pain and diarrhea caused from small intestinal constriction – may benefit from this type of diet.

However, there is limited evidence to back this up. In fact, a low-residue diet may only result in increased dysbiosis (microbial imbalance) in the gut.

Instead, a growing amount of research has found that a high-fiber diet will not worsen IBD symptoms, but improve them (9).

FODMAPs are short-chain carbohydrates that, when poorly digested, ferment in the lower part of your large intestine (gut), causing digestive problems.

In a study of 72 IBD patients given low FODMAP diet education, those who managed to follow it for 3 months (70% of patients) reported improvements in symptoms of pain, bloating and diarrhea (11).

Unfortunately, there were no biochemical markers measured and no way to accurately monitor eating habits during that time.

But studies that have reviewed dietary risk factors for IBD show that increased fruit and vegetable intake is actually linked to a much lower risk. This is in contrast to the first study as a low FODMAP diet tends to be low in fruit and vegetables (12).

This suggests a low FODMAP diet can be beneficial initially, but not in the long-run. Long-term restriction is not ideal for gut bacterial health and may cause further problems down the track.

Considering that most patients with IBD seem to recognize what foods can exacerbate their symptoms, I can see the potential for a low FODMAP diet in early stages of treatment (13).

It’s quite similar to the GAPS diet, particularly in foods that are not allowed.

Foods not allowed on SCD:

Both SCD and GAPS diets strictly limit grain fiber; however, no published studies show this to be beneficial for IBD. In fact, research indicates grain-based fiber could be beneficial for treating IBD, at least for ulcerative colitis.

In a pilot study of 22 patients in remission, 60 grams of oat bran daily was shown to increase fecal levels of a beneficial fatty acid by 36%, without making symptoms worse (14).

Much like SCD and GAPS, the Paleo diet is characterized by eliminating grains, rice and root vegetables, while eating more leafy vegetables and meat.

But there is no evidence of its effectiveness for IBD yet.

In contrast, a two-year clinical trial showed that a semi-vegetarian diet reduced the risk of relapse for Crohn’s disease patients compared to a patients on an omnivorous diet.

The semi-vegetarian diet was rich in brown rice, soybeans, potato and yam—all not permitted on strict Paleo (16).

Overall, the long-term effects of cereal grain and non-cereal grain fiber on IBD is uncertain, but it does not appear that the SCD, GAPS or Paleo diet restriction would be helpful.

In fact, a comprehensive review of recent data around diet and IBD concluded that soluble fiber from foods like oats, psyllium and pulses are most beneficial for those in remission. This diagram offers more of the researchers’ recommendations (17): 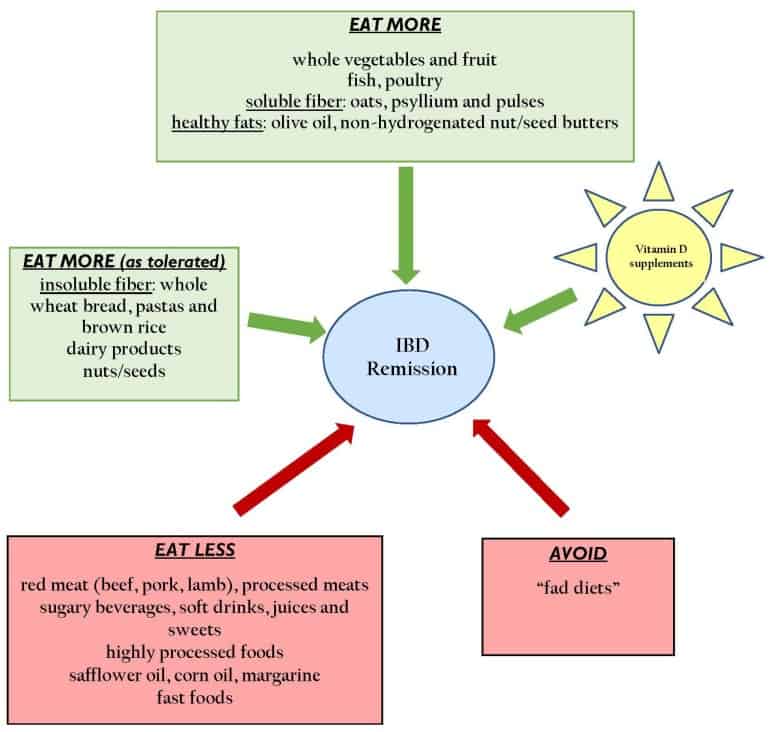 Summary: The science is lacking to support the use of an elimination or restrictive diet for Crohn’s disease. A low FODMAP diet could have its place as a temporary initial treatment. But the use of SCD, GAPS and Paleo diets are not evidence-based.

Probiotics and Other Supplements For Crohn’s Disease

A range of new products are now available to help treat Crohn’s disease.

But very few are backed by scientific evidence.

Probiotics are bacteria we eat specifically for health benefits.

There is now good reason to believe an imbalance in gut bacteria contributes to Crohn’s disease. Likewise, there is evidence suggesting probiotic use may be helpful. However, the majority of good studies so far are on animals or in test tubes (18, 19).

If probiotics are indeed useful, the actual beneficial bacterial strains appear to be E. coli Nissle, S. boulardii and Llactobacillus GG. As for brands, a mixture known as VSL#3 is the most well-regarded (20, 21).

There was one promising human study of 10 subjects with Crohn’s disease (not in hospital) that previously failed to achieve remission on medications.

They were given a combination treatment of probiotics (mainly comprised of Bifidobacteria and Lactobacilli at 75 billion colony forming units [CFU]) and prebiotics (psyllium at least 9.9 grams). This was given each day for 13 months on average (22).

Seven subjects had improved clinical symptoms of diarrhea and abdominal pain. Two of those were able to come off their prednisolone therapy, while 4 could decrease their dosage.

Given that side effects are very rare and there is beneficial potential, we cannot yet say that probiotics are useless. But we are just guessing about which types and how much.

Prebiotics are types of fiber that “feed” your gut bacteria.

Considering that intestinal damage of IBD is likely influenced by the immune response against certain gut bacteria, prebiotics are probably influential.

Research suggests that two forms of prebiotic – inulin and oligofructose – encourage the growth of beneficial lactobacilli and bifidobacteria. This is associated with reduced mucosal inflammation in IBD, at least in animal studies (23).

Fermentation of prebiotics in the gut also produces short-chain fatty acids such as butyrate. Butyrate has anti-inflammatory effects in the gut, with supplements resulting in clinical improvement in 9 of 12 Crohn’s disease patients (24).

Numerous natural supplements and alternative remedies have been linked to Crohn’s disease treatment (25).

Arguably the most promising is curcumin, the active ingredient in the spice turmeric. It appears to have powerful anti-inflammatory properties that can influence health.

Two human studies have shown benefits to IBD when supplementing with around 1 gram of curcumin per day. However, the vast majority of participants in these studies had ulcerative colitis rather than Crohn’s disease (26, 27).

Wheatgrass juice and aloe vera supplements are also promising, although it’s only been tested in ulcerative colitis patients (28).

Summary: A handful of alternative treatments and supplements could be beneficial for Crohn’s disease, though there are no clear recommendations for dosage or duration. They could be useful alongside primary medical treatment. 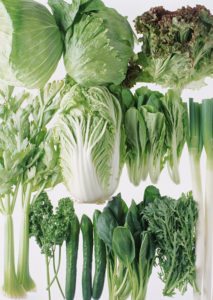 The role of specific nutrients in Crohn’s disease prevention or treatment is a busy area of research.

It seems that an intake of more than 22 grams of fiber per day is ideal, particularly from fruits, vegetables and legumes (11, 29).

The potential mechanism behind this benefit is not well-understood. However, many researchers speculate that butyrate is largely responsible. This is the by-product produced when certain types of fiber are fermented in the gut (prebiotics).

Vitamin D deficiency has emerged as a risk factor for Crohn’s disease.

Animal models suggest that vitamin D may improve intestinal barrier function and assist healing of the intestinal wall after damage (33).

Other Vitamins and Minerals

Patients with IBD can also have an increased risk of other nutritional deficiencies, including iron, calcium, vitamin B12, folic acid, zinc, magnesium and vitamin A.

For example, about 70% of males with IBD may present with a zinc deficiency. Meanwhile, anemia, often caused from a lack of iron, has been shown to affect up to 88% of IBD patients (34).

A visit with your doctor can help determine any possible deficiencies and what you can do to correct them.

Research on the role of animal foods and added fats is a mixed bag and cannot be used to make conclusions at this stage.

Observational studies tend to find a link between high consumption of animal foods and increased risk of Crohn’s disease.

High fish consumption has also been linked to worse outcomes, yet other studies show high omega-3 intakes to be beneficial (35, 36, 37).

All the main types of fat (saturated, polyunsaturated and monounsaturated) have also been linked to an increased risk, but not consistently, and mainly for ulcerative colitis (35, 38).

Given the quality of the observational evidence so far, it remains unclear what role animal foods and fatty acids play.

Summary: Sufficient vitamin D appears important, as does a diet rich in fibre from fruits and vegetables. The evidence for the role of fat and animal foods on Crohn’s is inconsistent and unreliable.

In summary, consider these points when treating Crohn’s disease with diet changes:

I wish I could give more practical advice, such as a meal plan, but Crohn’s disease is a very individualized condition.

What may work for someone else may not work for you.

Additionally, there is a lot about gastrointestinal diseases that medical science does not yet understand or know.

My best recommendation is to seek individualized treatment with an IBD-trained dietitian.

If You Prefer Video 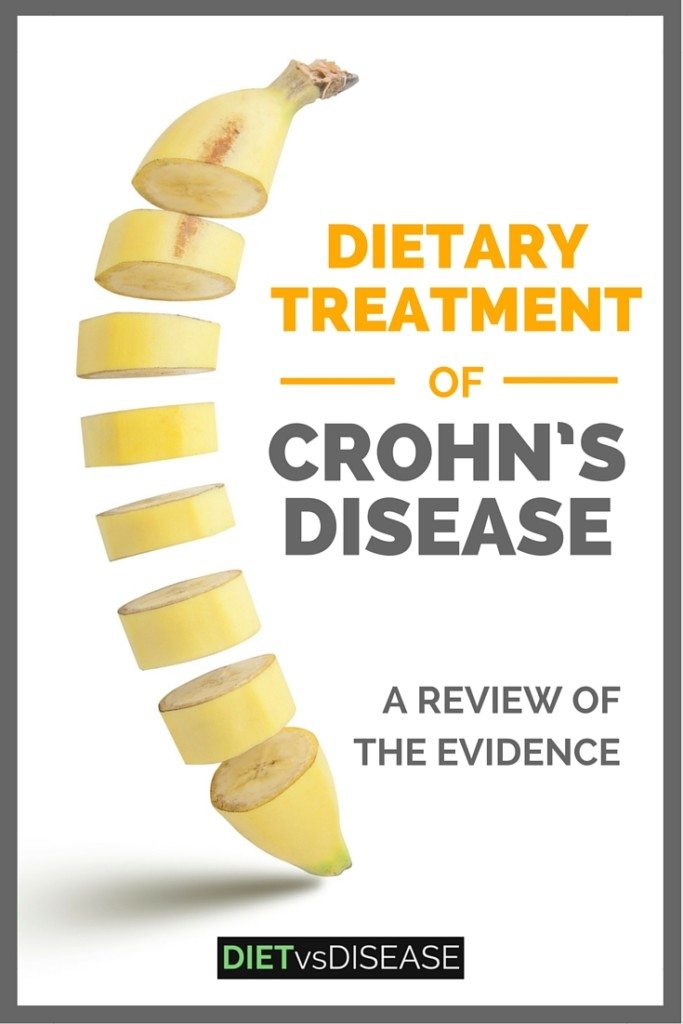