Remember when the paleo diet smothered your news feed?

Celebrities were raving about the “caveman lifestyle”, while researchers and dietitians were saying it was just a fad…

Well, we were right.

I’m looking at why the paleo diet is all but dead, and why the ketogenic diet will replace it going forward in 2018.

Here are 3 reasons why the paleo diet is done and dusted:

1. Nobody Searches It Anymore

If something is popular, Google knows.

This is because people are searching for it.

This chart shows the popularity of the search term ‘paleo diet’ on Google between 2010 and the end of 2017.

From Google: A value of 100 is the peak popularity for the term. A value of 50 means that the term is half as popular. Likewise a score of 0 means the term was less than 1% as popular as the peak. Click to enlarge.

Aside from the small spike in interest every January, that trend line will continue to decline.

You can’t argue with the hard data.

2. Paleo Enthusiasts Sold Themselves Out

Paleo was once about revolutionizing people’s health and way of living.

Now it’s about influencers and companies selling ready-meals, cookies and other “paleo” junk disguised as healthy. 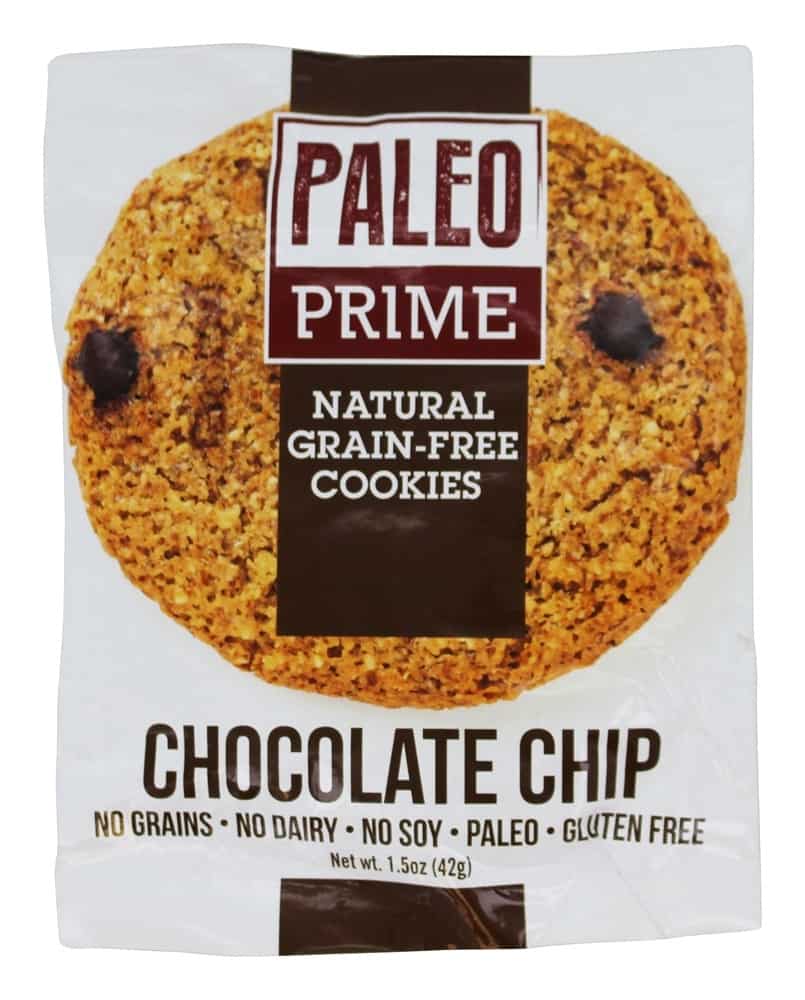 The oreos are genuinely the better choice if you’re trying to lose weight as you’d save 22 calories each time.*

(*edit: this is all other factors being equal. Of course oreos are not healthy… neither type of cookie is good for you if you want to lose weight.)

Paleo junk food is still junk food… Not to mention our paleolithic ancestors were not eating cookies.

It’s not only paleo junk food that’s an issue, but ready-made meals too.

Television chef Pete Evans, known as Paleo Pete, has released a range of packaged ready-made meals for those trying to “fit in meals between looking after the kids” (his words). 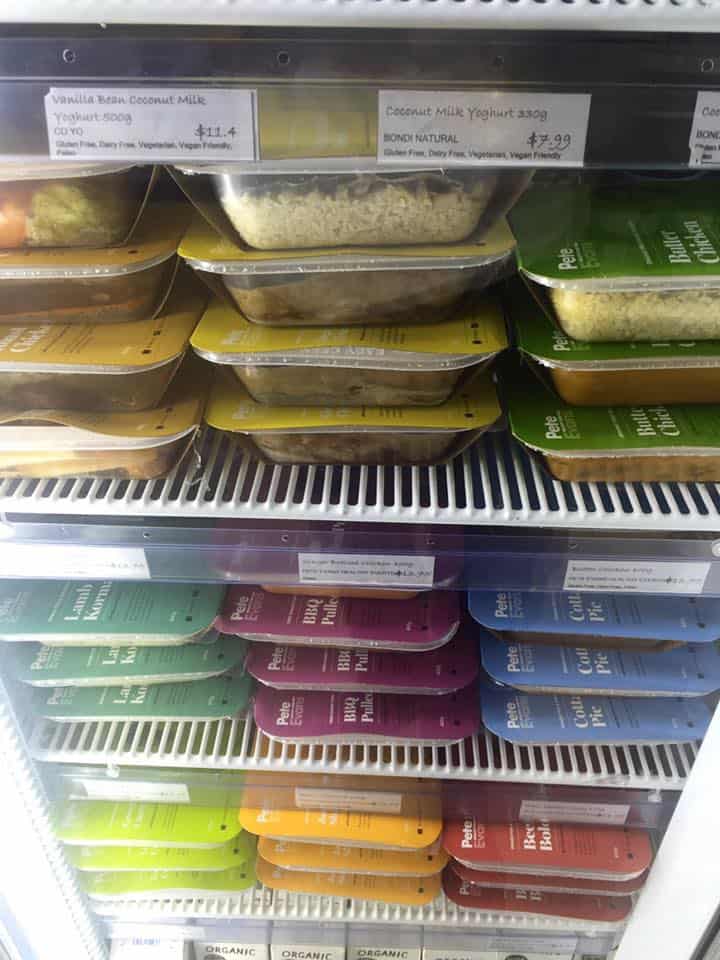 Packaged foods are, of course, the polar opposite of the paleo premise… Especially Pete’s approach to paleo, which was all about cooking with fresh, local food and involving the kids as well.

Cooking with “love and light” as he described it.

To add further irony, cooking instructions for these meals include a microwave option, which Pete believes is a health hazard.

He also says wifi is dangerous and that dairy ruins your bone health (a claim I debunked in this video).

3. It Was Historically Inaccurate and Near Impossible to Follow

The entire premise of paleo was flawed from the start.

Firstly, the types and quantities of fruits, vegetables and meat we eat today bare little resemblance to our paleolithic ancestors.

In fact, broccoli, cauliflower and kale didn’t even exist then, yet are permitted. Meanwhile, dairy and grains are not permitted because they didn’t exist (although grains actually did).

Secondly, famine was common for our ancestors, and there was little to no variety in their diet. Meanwhile, today we can get any food we like, in and out of season, and from all over the world.

Couple these facts with the realization that it’s fun to eat cake on your birthday, drink at a wedding, and make gingerbread at Christmas, and people stopped following it.

In other words, they eat healthier, but NOT paleo.

Summary: The paleo diet is all but dead. Search traffic has fallen 73% since 2014, advocates sold-out by creating paleo-branded processed and packaged foods, and nobody actually follows the diet properly.

The Ketogenic Diet Is The Future Of Weight Loss Fads

The aim is to replace the vast majority of carbs in your diet with fat, which puts your body into a metabolic state called ketosis.

When this happens, your body becomes more efficient at burning fat for energy. Your liver also produces ketones, which can supply the brain with energy.

The standard ketogenic diet (SKD) typically contains 75% of calories from fat, 20% from protein and only 5% from carbs. 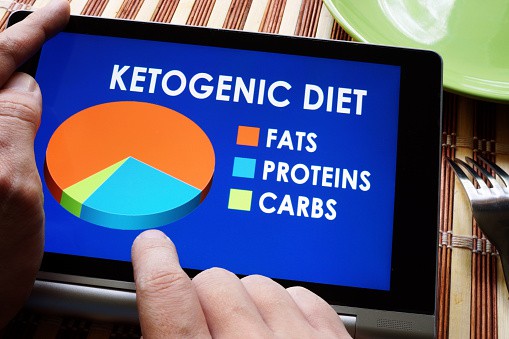 This means the average woman – requiring 2000 calories per day – must eat fewer than 25 grams of carbs each day, every day.

So eating a sandwich or one boiled potato will max out your daily carbohydrate allowance. Exceeding that will likely put you out of ketosis.

Note that protein intake must also be limited to around 100 grams per day, as a higher intake will also affect ketosis. It’s a high fat diet, not high protein.

Watch my short videos on the ketogenic diet and ketosis if you want to learn about its potential health effects.

Keto Diets Are The Next Paleo

The paleo diet was popular because it had a powerful narrative.

The keto diet builds on that narrative but includes additional and seductive promises. Enthusiasts claim it can:

… among many other things.

Sounds amazing right? If only it were true.

Unsurprisingly, the trend line for the search term ‘keto diet’ spiked sharply through 2017.

It’s already more than twice as popular as this time in 2017, and will only see a big jump when January’s data is added.

Basically, according to the data, the keto diet is literally replacing the paleo diet.

Marketers know this of course (this is data for them) so I expect a big swing from paleo-branded to keto-branded products this coming year… with a premium price tag of course.

Summary: The ketogenic diet is a very low-carb, high-fat eating pattern that allows only 25 grams of carbohydrate per day. Google data indicates our interest is shifting rapidly from the paleo diet to the keto diet.

Why Is The Keto Diet A Weight Loss Fad?

A weight loss fad diet is any eating pattern that requires dramatic and/or unnecessary food restrictions to achieve weight loss.

As a result, the average person is unable to maintain that diet for longer than one or two months.

Soon enough they revert back to their previous eating habits, and any weight lost is regained. The biggest loser contestants are a prime example of this phenomenon in action.

The ketogenic diet is basically the definition of a fad diet.

Consistently eating fewer than 25 grams of carbs means you can’t eat more than one banana or one small yogurt on any given day.

Eat them together and you’ve doubled your maximum carbs for the day.

And unlike paleo or other diets, there’s no cheating. A day of carb indulgence will put you out of ketosis.

It’s no wonder the dropout rate is enormous for those on a ketogenic diet, even when it’s for a serious medical reason (2). 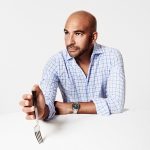 Dr. Peter Attia (“Mr. Ketosis”) – whom I greatly respect – was one of the early online ketogenic diet enthusiasts.

Even he no longer follows it after being “at the far end of the [diet] spectrum” (his words) for many years.

In a more recent update Dr. Attia said, “I’m still carb-restricted by the standards of most Americans, but nowhere near the ketogenic lines of 2011, 2012, and 2013.”

He concluded, “These days I’m eating about as freely as I have in 7 years.”

Need I say anything more?

But The Keto Diet Has Started Working For Me!

I know what comes next.

“If the ketogenic diet is just an extreme fad, WHY AM I LOSING WEIGHT, mate?”

The vast majority of us eat poorly. Too few fruits and vegetables and frequent calorie-dense foods leads to weight gain and metabolic health problems over time.

The keto diet, paleo, or just about any diet for that matter forces you to remove the largest source of your calories… junk food and drinks.

That calorie deficit is responsible for your weight loss… That’s it.

It’s not because ketosis sky-rockets your metabolism, nor is it because carbs automatically make you fat. It’s because you’ve began to eat fewer calories than you used to, day to day.

Of my favorite nutrition memes, this one illustrates it perfectly: 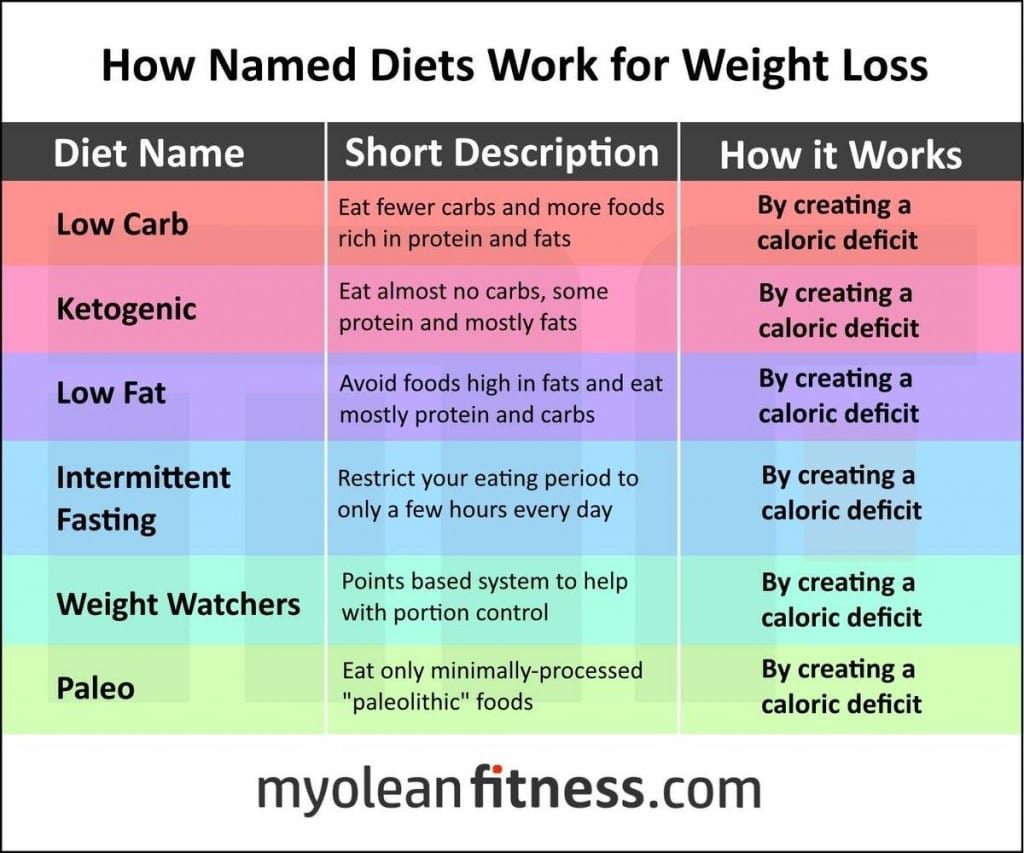 Nevertheless, when people begin to lose weight and it subsequently improves their heart health markers, they mistakenly attribute those effects to ketosis and the ketogenic diet.

For the record, you can be in ketosis and still gain weight if your calorie intake is excessive.

Additionally, there’s also the loss of water that occurs within 24-48 hours of dramatic carb restriction (3).

This leads to instant weight loss of several pounds… but it’s from water and not fat.

As soon as you eat carbs again the water will return.

In the end, studies consistently show us that the most effective weight loss diet is the one you can stick to (and want to stick to) long term…

I hope now you realize it won’t be the ketogenic diet.

Summary: The keto diet will help you lose weight initially because it forces you to cut excess calories that you used to eat from junk food. It’s not because of ketosis itself. You’ll also lose a noticeable amount of water weight.

Who Should Use A Low Carb Approach

For the record I’m definitely not a low fat diet advocate.

In fact, I’m for whatever diet suits you best.

For most looking to lose weight its usually a non-extreme low carb approach. More on that in a moment.

Firstly, know that a ketogenic diet can be a sustainable eating pattern if your goal is far more urgent than weight loss.

For example, it’s a proven treatment for severe epilepsy in children. You can make it work long term if there is a medical need and it’s medically supervised (4).

There’s also a case for those with extremely poor diabetes control (HbA1c of 10% or more). But even then it requires direct medical supervision (especially if diabetes medications are used) and would serve best as a short-term intervention for quick improvements.

In saying that, if the keto diet was positioned as a temporary eating pattern with guidance post-diet – much like the FODMAP diet for food intolerance – then it could be applicable for the wider population.

Certainly for those with pre-diabetes or a large amount of weight to lose.

For example, a daily carb intake of 150 grams is far less extreme than the 25 grams (or even 50 grams) allowed on the ketogenic diet.

Yet it can still be game-changing for anyone who has unsuccessfully lost weight and kept it off previously. Especially if you already have type 2 diabetes or insulin resistance.

It works because cutting carbs to around 150 grams per day automatically leads to an increase in protein and/or fat as a percentage of your overall calorie intake. 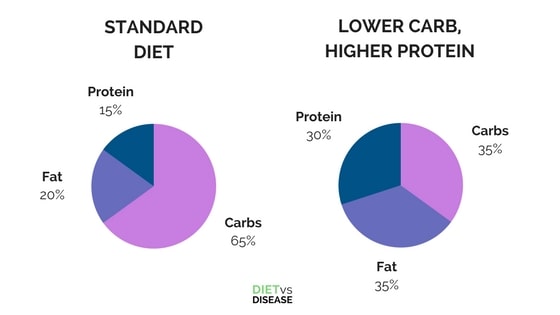 This shift in macronutrient ratio – particularly if you bump up your protein – will help you cut your calorie consumption.

Research indicates a diet higher in protein keeps you feeling full and curbs appetite. This helps you reduce your overall calorie intake, without relying on willpower (5, 6).

If your fat loss plateaus with that eating pattern and you still have a lot more to lose, it can even be combined with an intermittent fasting protocol (which is not a weight loss fad).

Of course, cutting carbs is just one of many weight loss strategies that work.