Cutting carbs is the most important change for weight loss.

They believe carbohydrate drives obesity because it raises the hormone insulin. Insulin is said to block the release of fat and also drive additional fat storage.

However, nutrition research continually shows that carbs alone DON’T make you fat. The latest clinical trial is no exception.

You might’ve already seen my stance on this. But let’s put our personal food ideologies aside for a moment to honestly consider the weight of evidence available.

Cutting Carbs Does Not Increase Metabolism or Fat Loss

If raised insulin drives weight gain, then conversely, reduced insulin (from cutting carbs) should be therapeutic.

In other words, we’d expect an extremely low carb diet to cause more fat loss than a typical Western diet.

The latest trial to compare these two eating patterns – ironically funded by Taubes’ own NuSI organisation – indicates this is not true.

This was a tightly-controlled, metabolic ward trial, which means no cheating on the diet.

For 4 consecutive weeks, 16 overweight or obese men were fed a standard American diet, quite high in carbs (50% Carbohydrate, 15 % Protein, 35% Fat).

According to the sample menu published, it included loads of refined carbs including lemonade, granola bars, pretzel sticks and sandwich bread.

Participants were then immediately switched to a very low carbohydrate, ketogenic diet (5% Carbohydrate, 15% Protein, 80% Fat) for another 4 weeks (1). 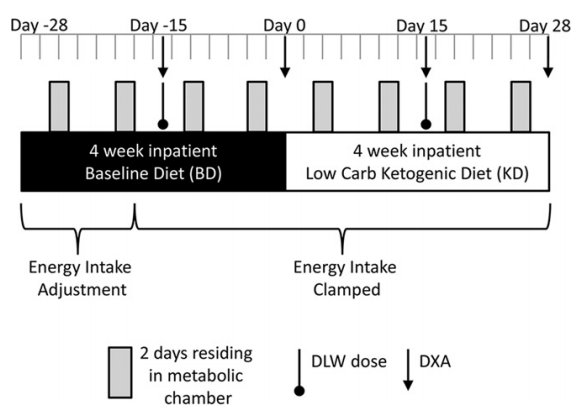 Both the high carb diet and the ketogenic diet were equal in calories and protein, and they had no access to any outside foods for the entire 8 week period. Participants also rode an exercise bike for 30 minutes daily. 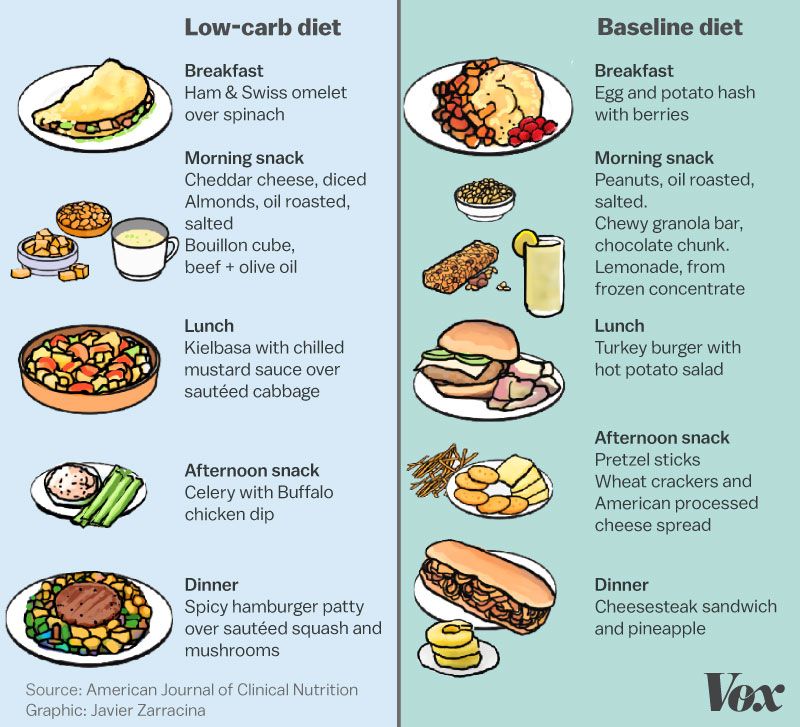 Changes in energy expenditure, body composition and relevant blood markers were recorded each day using the gold-standard methods where possible.

After the first 4 weeks on the high carb diet, participants lost 1.1 lbs  (0.5 kgs) of body fat on average.

Switching to the low carb diet for the remaining 4 weeks led to a dip in insulin levels by almost half. However, once again participants lost just 1.1 lbs of body fat. 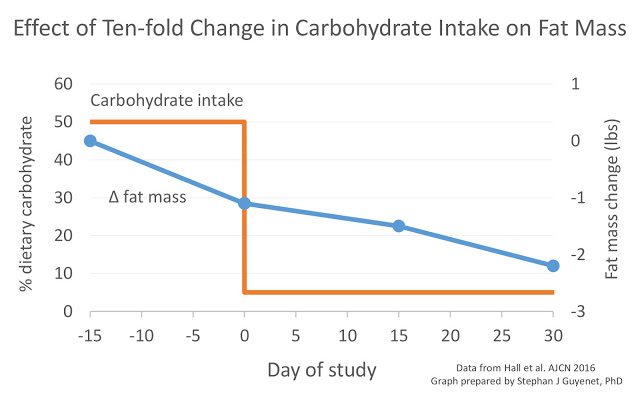 So there was no difference between eating patterns on fat loss despite the difference in insulin, effectively disproving the carbohydrate-insulin hypothesis.

Switching to the low carb diet did cause an initial sharp decrease in total weight loss, but this was due to the drop in water weight that accompanies carb restriction (2). 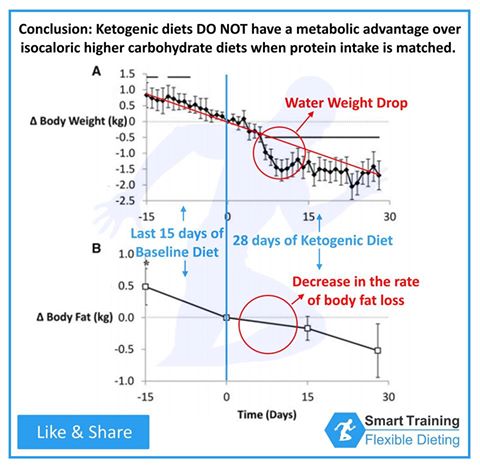 To be fair, the low carb diet did increase metabolic rate by 57 calories per day on average. This outcome was actually the main aim of the study.

However, this number started much stronger before plummeting down to about 40 calories per day, which is clinically insignificant. In fact, the metabolic advantage all but disappears after several weeks.

But it doesn’t actually work like that. A daily deficit of 40 calories is likely to equal only 4 lbs of weight loss after 2-3 years, if you don’t cheat.

Is that worth cutting your diet to strictly 5% carbs?

Summary: A well-designed clinical trial, funded by low carb advocates, found a low carb ketogenic diet was not beneficial for fat loss or metabolic rate. The high carb diet was just as effective – if not better – for body fat loss, despite the higher insulin levels.

Other Trials Show No Advantage From Cutting Carbs

This was not the first well-controlled clinical trial to show cutting carbs has no advantage for fat loss.

In fact, it was shown over a decade ago.

In a 6-week trial of 20 subjects randomly assigned to follow either a ketogenic diet (5% carbs) or a moderate carb diet (40% carbs), there was no difference in average weight loss, fat loss or insulin changes. All food and beverages were provided to participants (3).

If anything, strictly cutting carbs leads to less fat loss as time goes on. Subjects also reported the ketogenic diet was worse for feelings of energy and overall mood.

There was also a smaller and slightly different version of the above NuSI study, also run by Dr. Kevin Hall.

His team found a reduced carb diet (29% carbs) resulted in less fat loss than a reduced fat diet (7.7% fat). At the time, their computer model even predicted the trend seen in the latest study (4): 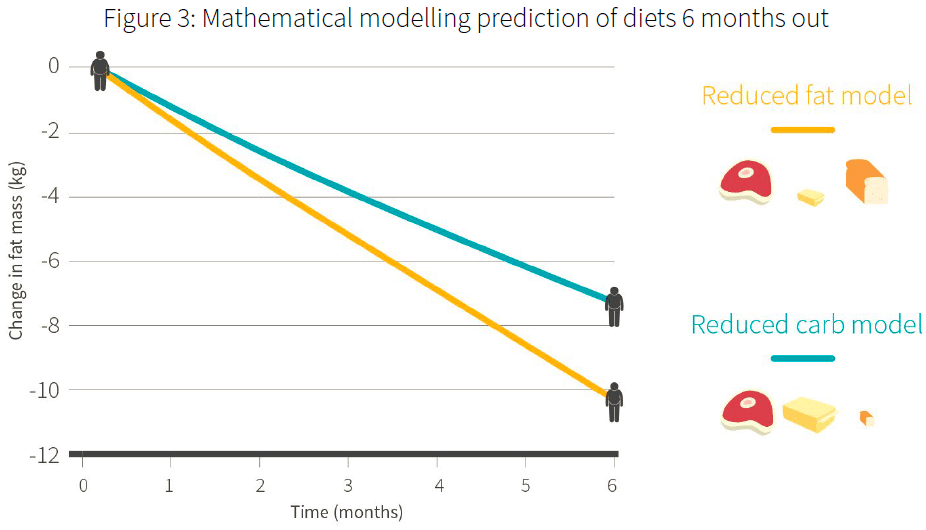 Although the reduced carb diet (29% carbs) was not quite “low carb”, it still lowered insulin levels considerably. Despite this change there was no fat loss advantage.

Summary: Several other well-controlled trials looking at the fat loss effects of reduced carb and very low carb ketogenic diets indicate they are not beneficial for long-term fat loss.

Do Carbs Make You Gain Weight? 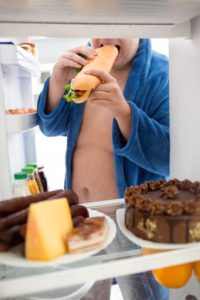 It’s evident that restricting carbs is unnecessary to lose weight… But what about gaining weight?

Is overeating carbs worse than overeating fat, as per carbohydrate-insulin hypothesis?

This has also been well-studied, and clinical trials show this is not the case, per unit calorie.

In a study of 16 men (9 lean and 7 obese), subjects were fed a strict diet providing 150% of caloric requirements (designed for weight gain). The additional 50% of calories came from either carbohydrate or fat for 14 days at a time. Subjects completed both diets in a crossover design. 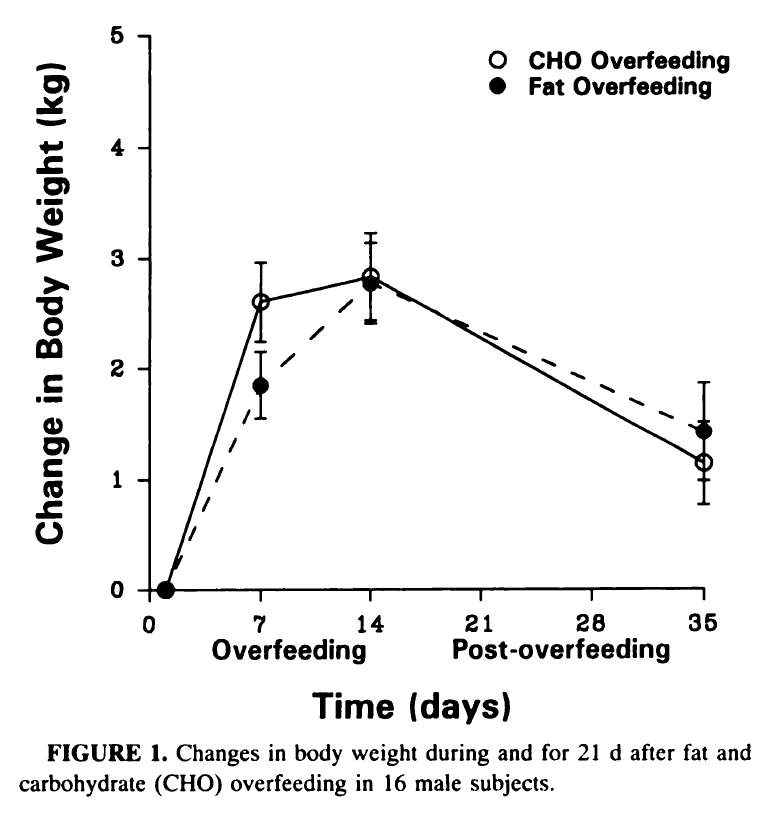 These increases did not differ between the lean and obese subjects either. 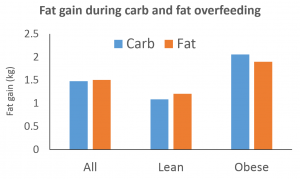 Another similar overfeeding study of 20 lean men also found no differences in the increase of total weight or fat mass gained after 21 days (6).

It appears when calories are matched, there’s no difference in fat gain between overeating carbs or fat.

What About When We Don’t Overeat?

Do carbs influence body fat in individuals who are not overeating calories?

In a series of tightly controlled clinical studies, 15 subjects were fed a diet that shifted greatly in the amount of carbs or fat it contained over a 13-week period. The calorie amount was for weight maintenance (no gain or loss), and was kept the same regardless of the carbohydrate-to fat ratio (7, 8).

This is how one subject’s weight tracked throughout the study. The first 38 days were high carb (75% carbs), the remaining were low carb (15% carbs).

The researchers concluded, “The carbohydrate-to fat ratio could vary widely with little or no alteration in the energy requirement for weight maintenance.”

Therefore, if you aren’t consuming excess calories, weight stays the same regardless of the amount of carbs you enjoy.

Summary: Clinical studies show that eating carbs instead of fat makes no difference to body fat, as long as total calories remains the same. This holds true whether we overeat calories or not.

Still  not convinced that carbs are not uniquely fattening?

Even if we ignore the clinical studies (the most powerful evidence available), the carbohydrate-insulin theory doesn’t fit the historical and observational evidence.

Indigenous groups like the Tarahumara Indians, Kitavans and Massas all thrived on high carb diets for hundreds of years. Obesity was rare (if not non-existent) in all of these indigenous groups (9, 10, 11).

For example, Kitavans had virtually no overweight people – and very low insulin levels – despite a diet that was 70% carbs (12).

The same was observed for pre-industrialized Asian populations up until the 20th century, living on staple foods like rice, noodles, potatoes and fruit (13, 14).

If carbs themselves are fattening, these populations would not have had lean bodies and good health overall, regardless of how active they were.

Taubes’ counter argument is that obesity was not uncommon in many native populations from the 1950’s onward. However, by this time many developing nations and Indigenous groups – such as the Pima Indians – already had access to refined, affordable (often subsidised) Western food.

Summary: There are numerous historical examples of populations that remained slim and healthy eating high carb diets. This indicates carbs themselves are not fattening. Indigenous groups only became obese after the introduction of Western junk food.

Those Who Live Longest Eat A Lot of Carbs

There are still modern day humans thriving on high carb diets too.

In fact, many of them have the lowest rates of metabolic disease and obesity, and live longer than anyone else. The regions where they live – known as Blue Zones – give us valuable insights into the lifetime effects of certain eating patterns. 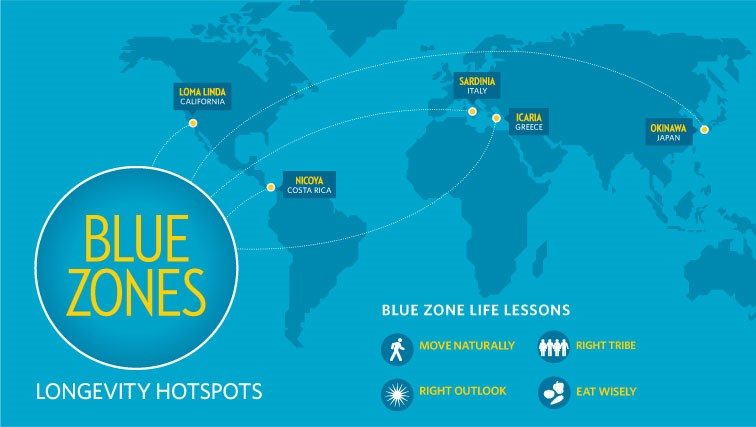 The Japanese island of Okinawa has the greatest proportion of centenarians (people over 100 years old) in the world.

Their diet has always been carb-dense; high in sweet potatoes, legumes and rice to a lesser extent. In fact, a massive 85% of an Okinawan’s caloric intake came from carbs prior to the 1950’s. Sweet potatoes alone accounted for 69% (16).

More than 65 years later and so many of them are still alive and well.

Those from the Greek Island of Icaria also live long and healthy lives, despite a diet high in bread, potatoes and legumes. 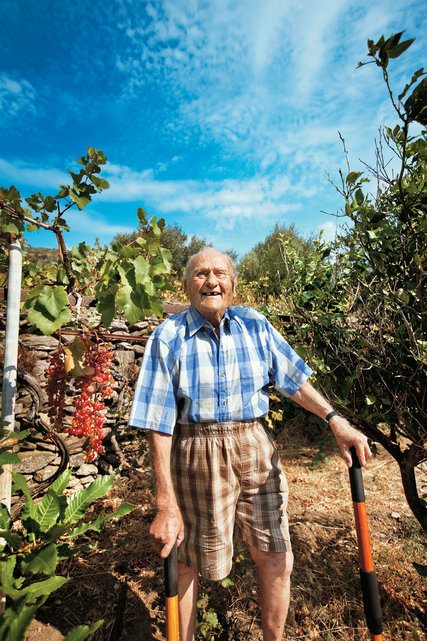 Other Blue Zone regions share similar dietary traits to the Okinawans and Icarians, so it’s not just a freak coincidence.

Granted their active lifestyles is a factor to their longevity, but a high carbohydrate diet does not cause them to get fat or sick.

But A Low Carb Diet Works For Me? 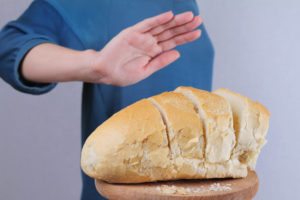 Studies show low carb diets can be an effective strategy for weight loss.

Especially if you previously struggled following a low fat diet.

A reduction in carbs automatically means an increase in protein and/or fat. It’s this entire nutrient ratio shift – coupled with an increase in whole (unrefined) foods – that’s responsible for the positive outcome.

Studies show a diet higher in protein keeps you feeling full and tends to decrease overall calorie intake, at least in the short term (18, 19, 20).

A diet lower in refined carbohydrate and fat – typically found together in junk food – also favours a reduction in calorie intake. This is because of how calorie-dense and highly palatable junk foods is.

Then there’s also the loss of water that accompanies carb reduction. Alongside fat loss, this makes the bathroom scales shift favourably, and quickly (2).

The combination of these factors is why a low carb diet so often leads to weight loss. Replacing refined carbs with protein (and possibly fat) can help to consistently curb your appetite and reduce total caloric intake, without relying on willpower.

Summary: Many are successful on a low carb diet because it automatically higher in protein, which helps to curb appetite. They also typically eliminate all junk foods, which is where our excess calories come from.

No, Carbs Don’t Make You Fat

The science is in.

Carbs are no worse for your waistline than any other nutrient.

Studies show that when low carb and high carb diets are matched for calories, there is zero difference to body fat change. Regardless if your total caloric intake is excessive or not.

This makes sense considering all the past and present populations that thrive on high carb eating patterns.

That’s not to say carb-laden junk foods and soft drinks are off the hook. These products are low in nutrients and do not make you feel full or satisfied. They are undoubtedly the biggest contributors to excess calories, and therefore one of the main drivers of obesity and related health problems.

But it’s because of junk food as a whole – the total calories – and not just the carbs.

If you enjoy a low carb eating pattern and it’s improved your health then there’s no reason to stop. It may even be superior to low-fat for managing diabetes.

But there’s no need to cut carbs to extremes, such as a ketogenic diet.

So stop telling people it is.