The FAILSAFE diet is an elimination diet to test for food chemical sensitivities.

This article takes a closer look at what it is, how it works and who might benefit from it.

What is the FAILSAFE/RPAH Diet?

FAILSAFE stands for Free of Additives and Low in Salicylates, Amines and Flavour Enhancers.

Both names are interchangeable, but for this article we will refer to is as the FAILSAFE diet as this is more commonly used.

The aim of the FAILSAFE diet is to determine if certain food chemicals are the cause of negative physical reactions, typically digestive issues.

The initial phase eliminates major sources of food chemicals (more on that below). You can choose to follow a strict, moderate or simple approach based on the severity of symptoms.

After 2-6 weeks, the dieter goes through rechallenges to pinpoint which chemicals caused reactions in the first place.

It’s not unlike the low FODMAP diet, which is an elimination diet used to detect food intolerance and treat irritable bowel syndrome. The FAILSAFE diet would usually be considered by those who had no relief on a low FODMAP diet.

Summary:   The FAILSAFE diet is also called the RPAH diet and tests for food chemical intolerances. It consists of an elimination and rechallenge phase, much like the low FODMAP diet.

What is a Food Chemical Intolerance? 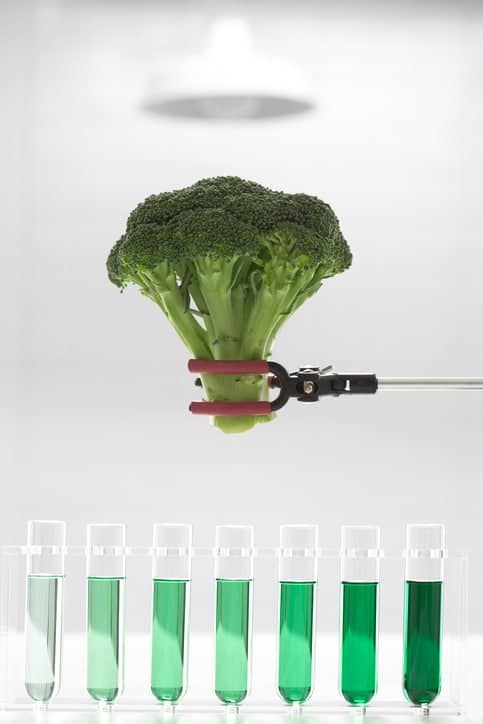 Food chemicals can be naturally occurring compounds found in foods, pesticides used in the farming of food, or preservatives, colorants and flavor enhancers added during processing.

Note that a food chemical intolerance involves compounds that are distinct from FODMAPs (short-chain carbohydrates) and gluten (a protein).

Each chemical can be found in a number of different foods, so a range of foods will need to be avoided if you have an intolerance.

In saying that, some food chemicals can be tolerated in small amounts, also known as a threshold. However, if you eat multiple foods containing the same chemical, it can accumulate and cause a reaction. 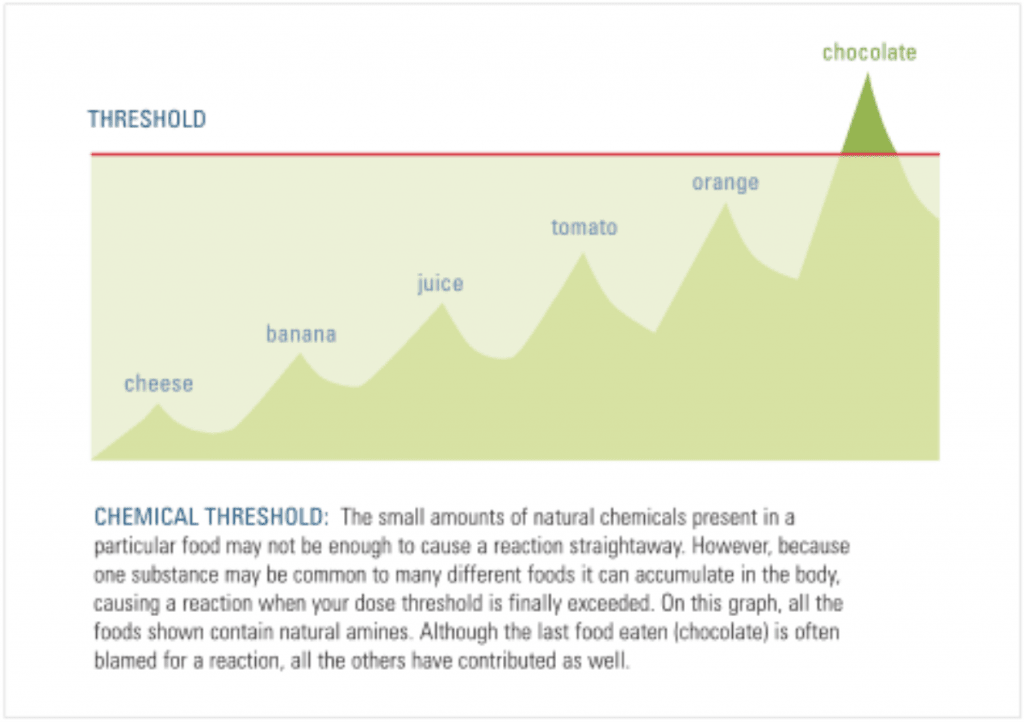 What Are the Different Types of Food Chemicals?

These are four main groups of food chemicals: 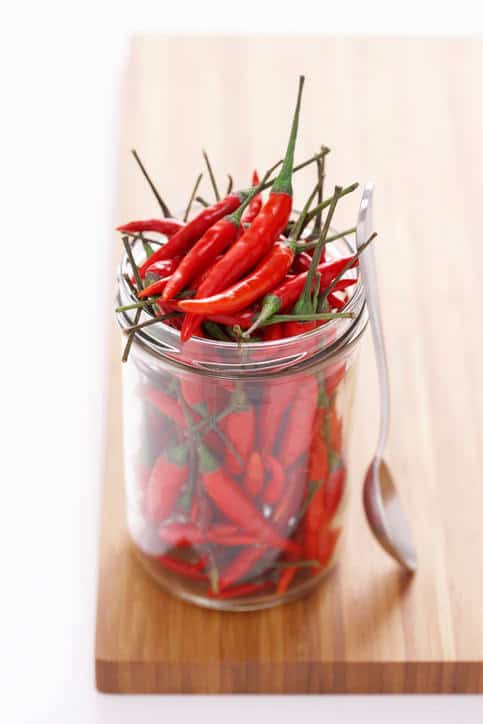 Salicylates are present in a number of plants, salicylic acid is also found in high amounts in aspirin.

While there is evidence to suggest people with salicylate intolerance react to salicylates found in medications, intolerance from dietary sources is less understood (1, 2). 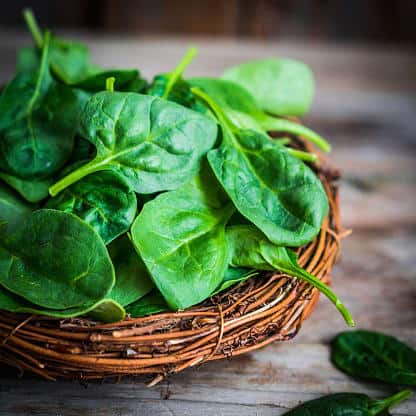 This group of compounds, which includes histamine, can produce physiological responses in the body.

When biogenic amines reach toxic levels, adverse reactions can occur, such as in scombroid poisoning (histamine) from fish.

Some people also have histamine intolerance. This means they may not have enough of the enzyme diamine oxidase, which breaks down histamine. This can lead to toxic levels.

More research is needed regarding other amines causing food intolerances (3, 4).

There’s a lot of conflicting evidence as to whether glutamate causes adverse reactions. Reactions may occur when ingested levels are higher than those found naturally in food (5). 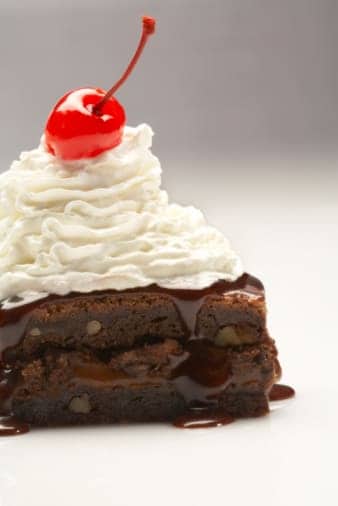 Many food additives are chemically the same or similar as natural food chemicals, and may also cause reactions.

Certain preservatives can produce sulphur dioxide and hydrogen sulphide when they reach the acidic environment of the gut, potentially causing hypersensitive reactions. However, this is not well studied and there is minimal evidence that these additives cause adverse reactions (6, 7). 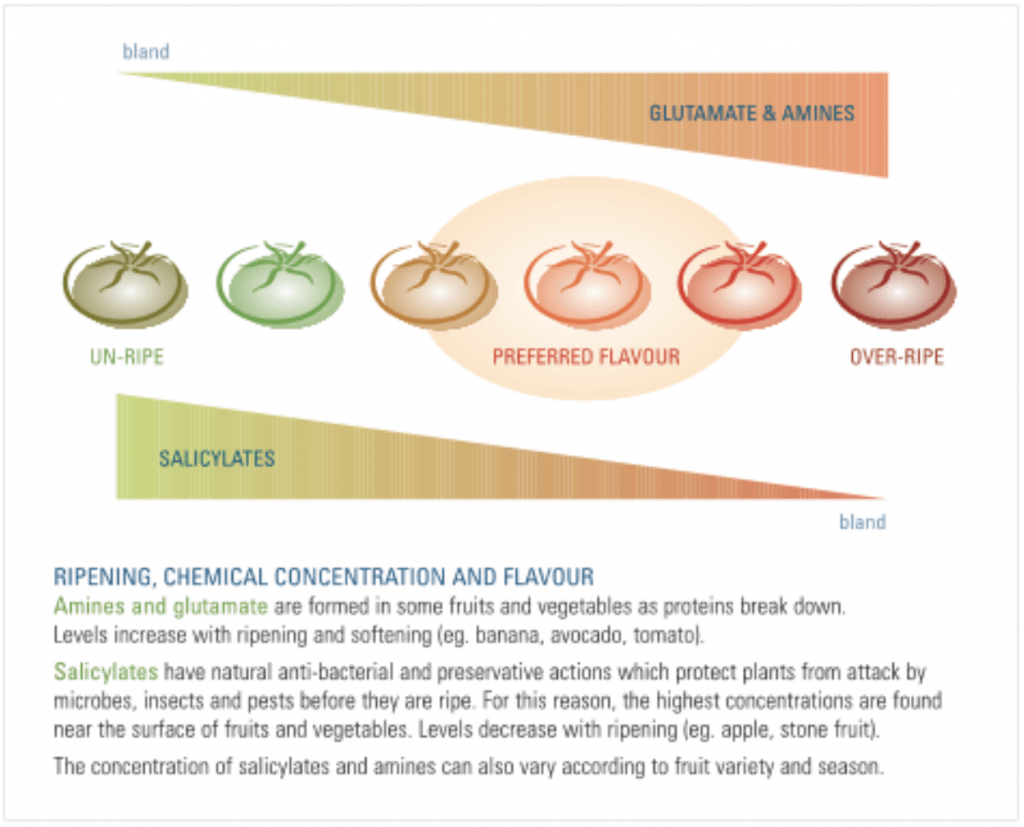 Summary: Food chemicals are natural compounds that are classified into salicylates, amines and glutamates. They can also be additives such as colours or preservatives. Some people may be intolerant to these compounds, most notably histamine. However most of the evidence to support this is anecdotal.

This is a complete 21-page list of the main food chemical culprits in common foods we eat.
We use this list with our clients, today you can access it for free.
Simply tap the blue button below and we can send it:

Symptoms of a Food Chemical Intolerance 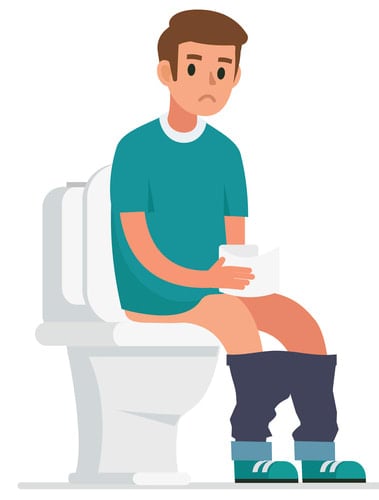 Symptoms can occur within an hour or develop much later, even into the next day.

Food chemical intolerances are complicated, but are thought to cause irritation to nerve endings in various parts of the body. This can produce a variety of symptoms.

The following are the most commonly reported:

In a study conducted by the creators of the RPAH diet, 65 participants suffering from chronic hives and swelling were put on a low-chemical diet for 2-4 weeks.

Chemicals were challenged and participants were put on a revised diet restricting chemicals thought to cause reactions.

They reported that 75% of the patients experienced no symptoms after 6 months on the revised diet. However, there was no control group so it is possible some people would have experienced a natural reduction over time (8).

In a more recent study of 838 participants, only 31% experienced a reduction in symptoms when put on a low chemical diet for 4 weeks.

Food chemicals are though to cause irritation to the nerve endings in the gut, causing digestive disturbances and exacerbating IBS symptoms.

While it possible this occurs, available evidence for the efficacy of low-chemical diets and IBS is lacking. However, if a low FODMAP diet does not produce results, a low-chemical diet could be trialled. This will be discussed in more detail below (11).

A number of foods have been reported to trigger headaches and migraines.

A review of multiple studies found no significant effect of MSG on headaches when ingested in food. However, when MSG was given at high doses without food, participants experienced some occurrence of headaches (12).

There is some evidence to suggest other foods, such as chocolate, caffeine, alcohol, aspartame (chewing gum) and dairy may also trigger headaches. This evidence is conflicting, and an exclusion diet is recommended to pinpoint if a particular food triggers headaches (7, 13).

The following are also frequently reported:

Keep in mind, many of these symptoms are non-specific and could result from a number of other conditions.

Summary: There are several broad symptoms associated with food chemical intolerance. The most common include hives and swelling, digestive disturbances and headaches. 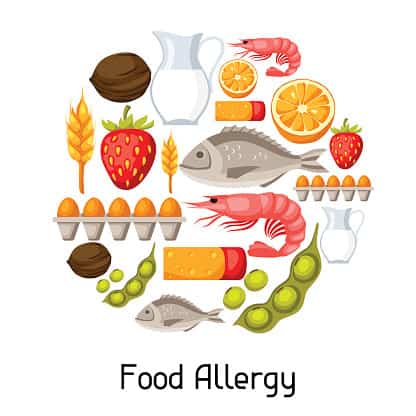 It’s important to make the distinction between a food allergy and a food intolerance.

Reactions to fruits, vegetables, herbs and spices are usually due to a food intolerance rather than an allergy.

Basically, food allergies can be life-threatening, whereas food intolerances are not.

If you believe you might have a food allergy, you should get a proper allergy test from your doctor. Many allergy tests available online have not been validated with scientific evidence and may not produce accurate results.

Summary: A food intolerance is not life-threatening and does not involve an immune system reaction like a food allergy.

The goal of a low FODMAP diet is to determine if certain carbohydrates (called FODMAPs) are not properly digested in the gut.

It’s well-supported by research and is currently the primary method for treating IBS.

The FAILSAFE diet, meanwhile, tries to identify if a specific food chemical is causing an adverse reaction. Essentially, these diets focus on different compounds.

Additionally, food chemical elimination diets are based on quite old research that many health professionals are not overly confident about (3, 4, 15).

In terms of how they differ, many foods low in food chemicals are high in FODMAPs.

For example, pears are allowed on the FAILSAFE diet but would be excluded on a low FODMAP diet. 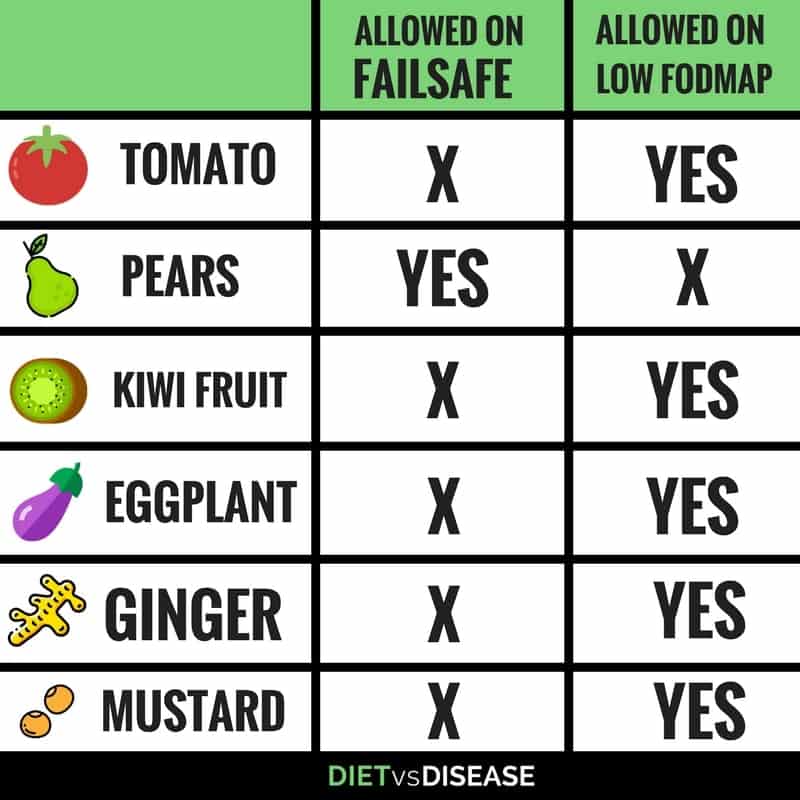 FODMAP and food chemical intolerances produce similar digestive symptoms, so it’s difficult to determine which type of elimination diet is most suitable.

If you have tried a low FODMAP diet properly and are still experiencing symptoms then you should consider the FAILSAFE diet. Additionally, people with food chemical intolerances might do well initially on a low FODMAP diet, but symptoms often come back or do not fully resolve (1, 11).

Summary: A low FODMAP diet attempts to identify a sensitivity to certain carbohydrates, while a FAILSAFE diet checks for a food chemical intolerance. FODMAPS are more likely to cause digestive issues and should be ruled out before trying a FAILSAFE diet.

The FAILSAFE diet is somewhat complex and involves three stages.

These are very similar to the low FODMAP diet.

The first step is a complete elimination diet.

This is extremely restrictive and typically lasts 2-6 weeks. It’s followed until you have experienced five consecutive days without symptoms.

You may also need to exclude dairy, gluten and certain FODMAP carbohydrates, depending on your symptom history. This will ensure that these foods are not interfering with results.

After consulting with your dietitian or referring to the RPAH Elimination Diet Handbook, based on your symptoms you can decide  to follow the strict, moderate or simple version of the diet. Find a comprehensive list of foods to eat and avoid in this PDF.

The second step involves a series of rechallenges that test for reactions to particular food chemicals.

If you eliminated dairy and wheat in the first step, you will rechallenge these first. Next, move on to salicylates and amines, because they are present in the most amount of foods. Lastly, you can challenge food additives.

It’s kind of the the same formula as the FODMAP reintroduction phase.

It’s important that each chemical is tested individually, so you can clearly identify which one is causing a reaction. This PDF also covers the types of foods and the amounts necessary to challenge each food chemical.

If your reactions are severe, you can do challenges with a doctor or dietitian using capsules containing concentrated amounts of each food chemical. This can be done blinded (you are unaware) or double blinded (both you and your dietitian are unaware).

The last step is to continue with a modified low-chemical diet depending on your challenge results.

You will need to minimise the amount of the reactive food chemical in your diet. When you feel comfortable, you can re-challenge, or slowly reintroduce it back into your diet.

Who Should Try the FAILSAFE Diet and Does It Work?

The FAILSAFE diet appears to be the best method to test for a food chemical intolerance.

However, much of the research on this diet is outdated. There is also conflicting evidence to support the theory that many of these compounds produce adverse reactions.

The issue is that side effects from food chemical sensitivities are numerous and extremely broad. They can reflect symptoms of a number of other conditions.

That said, there is a wealth of anecdotal evidence (personal testimonies) to suggest some individuals do react badly to certain foods.

If you have symptoms of a food intolerance that are not related to digestive issues, and have been tested for allergies, you might consider the FAILSAFE diet.

If you have digestive issues or IBS it would be advisable to try a FODMAP elimination diet first.

You might also consider the following causes of food reactions, before deciding if this diet is right for you:

For a full rundown of foods to avoid on the FAILSAFE elimination diet check out the Elimination Diet Handbook.

If you decide to undertake the FAILSAFE diet, it’s best to do so under the supervision of a dietitian specialising in food chemical intolerance.

This is a complete 21-page list of the main food chemical culprits in common foods we eat.
We use this list with our clients, today you can access it for free.
Simply tap the blue button below and we can send it: 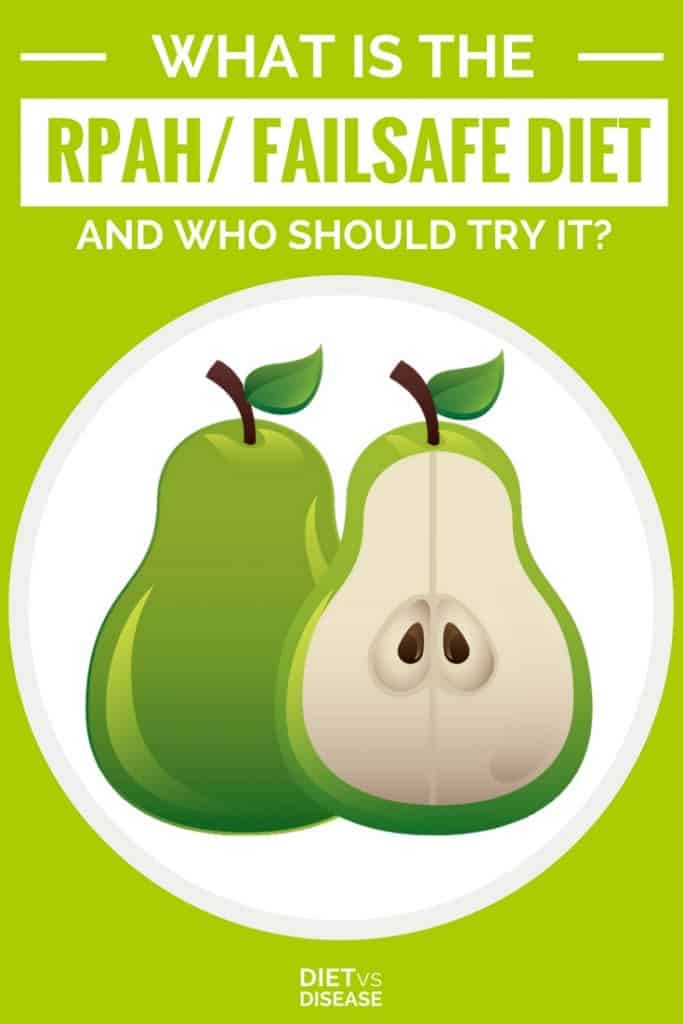