Around 1 in 100 people have celiac disease worldwide (1).

The only known treatment is a strict gluten-free diet, which is not easy to do.

This article takes a detailed look at managing celiac disease and how to do a gluten-free diet.

What is Celiac Disease?

Celiac disease (also called coeliac disease) is an autoimmune condition that can damage the small intestine.

Specifically, the small intestine has many small projections (villi) along it, which help absorb nutrients from food. In celiac disease these are damaged and nutrients can’t be absorbed properly. 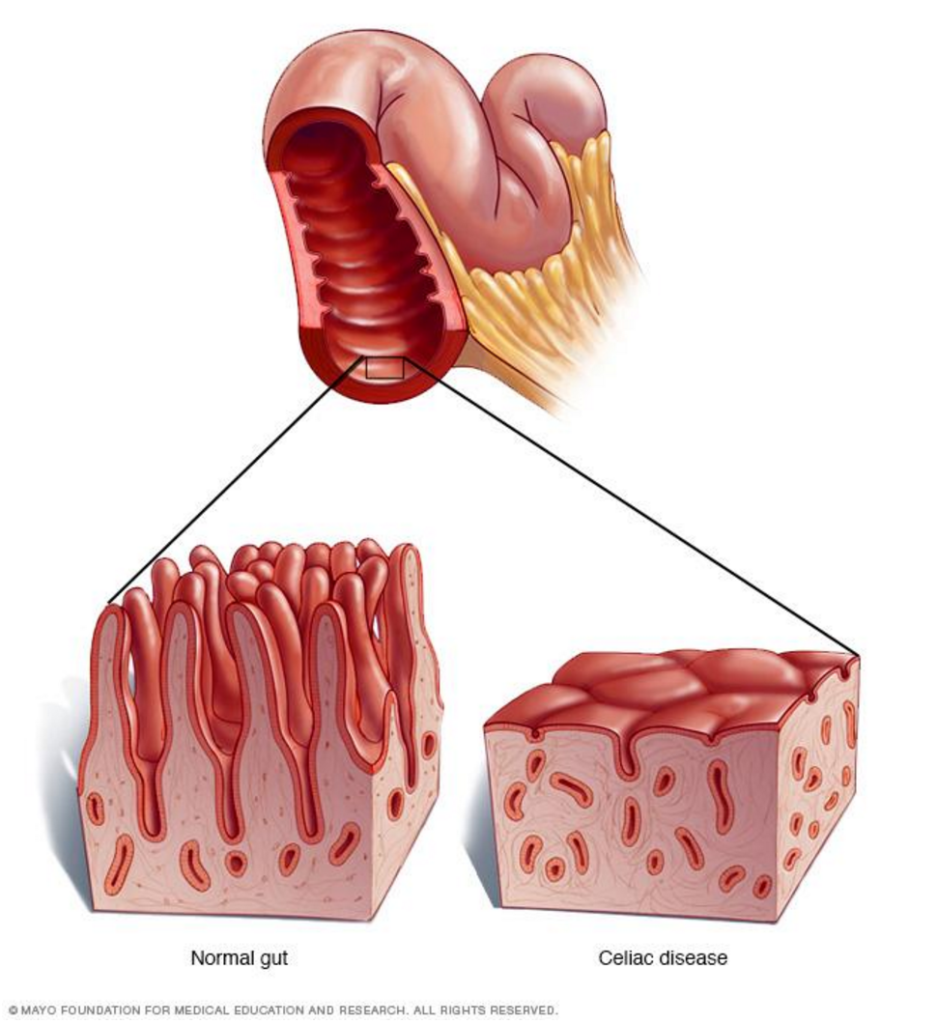 Celiac disease causes the immune system to see gluten as a threat, attacking both the gluten and the villi of the small intestine. Therefore, people with celiac disease need to avoid foods containing gluten.

Gluten is a naturally occurring protein that gives bread its elasticity. It’s found in:

Celiac disease should not be confused with gluten intolerance.

Gluten intolerant individuals can tolerate small amounts of gluten up to a certain threshold, whereas celiacs cannot tolerate any gluten at all.

Don’t self-diagnose though… see your doctor to rule out celiac disease first.

Summary: Celiac disease is a genetic condition that causes damage to the gut lining when gluten is eaten. Gluten is a protein found in wheat, rye and barley. Make sure to rule out celiac disease before considering gluten intolerance. 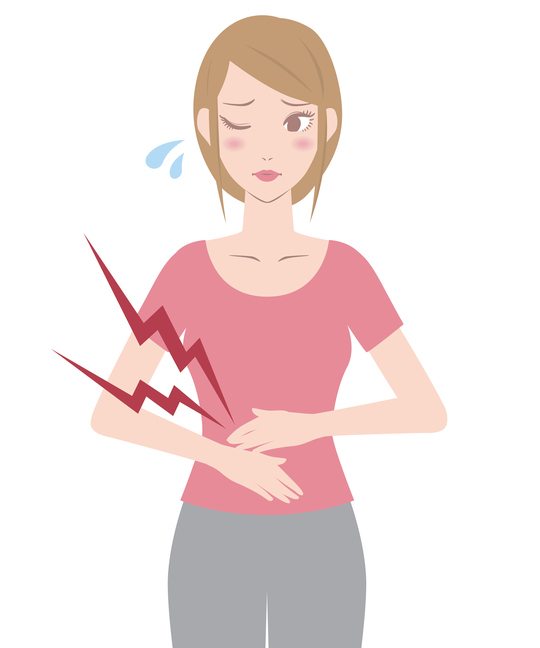 It can sometimes be confused with irritable bowel syndrome (IBS), as they share similar symptoms. 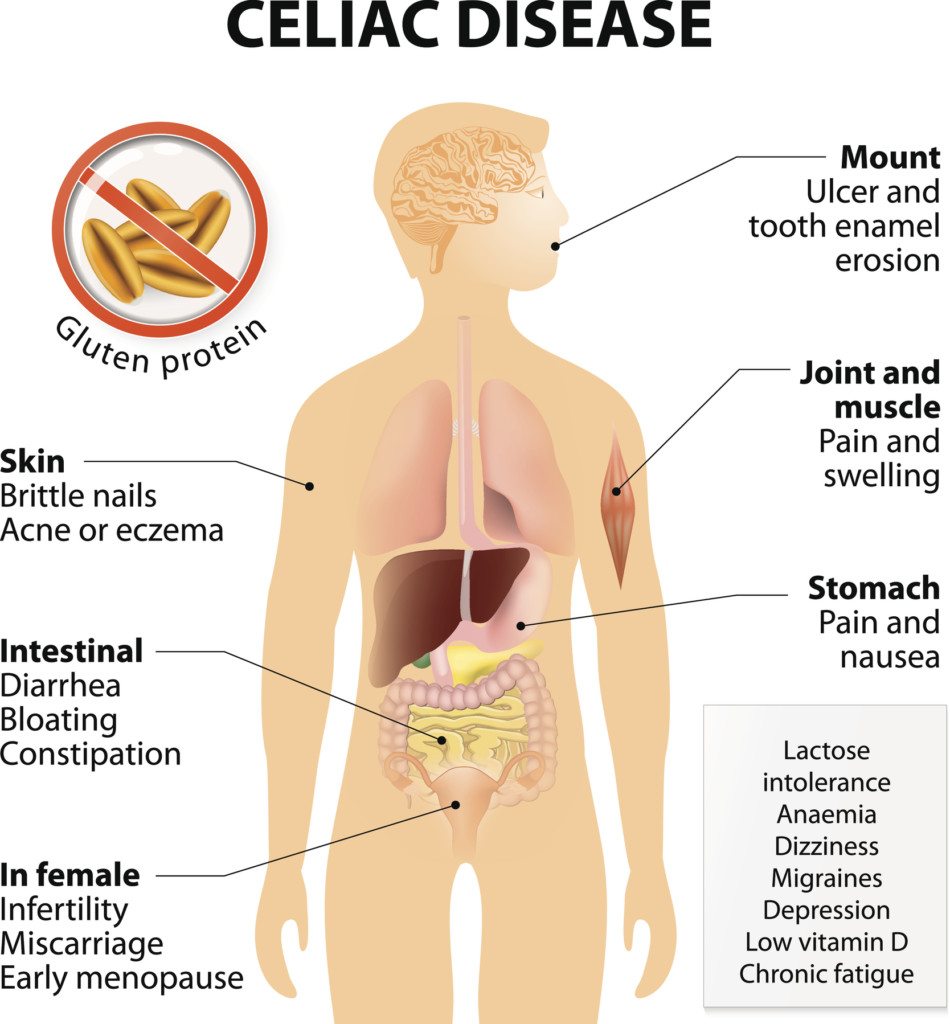 Summary: Celiac disease has a wide range of symptoms that can impact many organs. Many are similar to what you would experience with IBS. 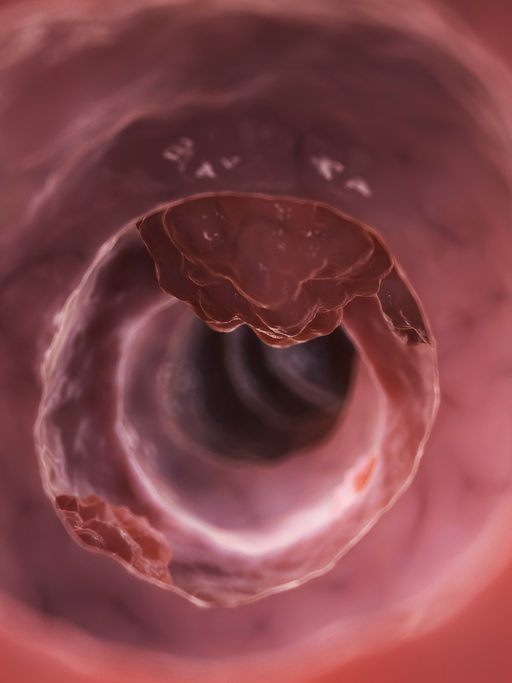 If poorly managed, celiac disease can cause a host of serious health problems.

Many of these stem from malabsorption of nutrients in the gut.

Fortunately, a strict gluten-free diet can help reduce the risk of these complications.

Summary: Celiac disease can cause many serious health problems if left unmanaged.

Should you get tested? 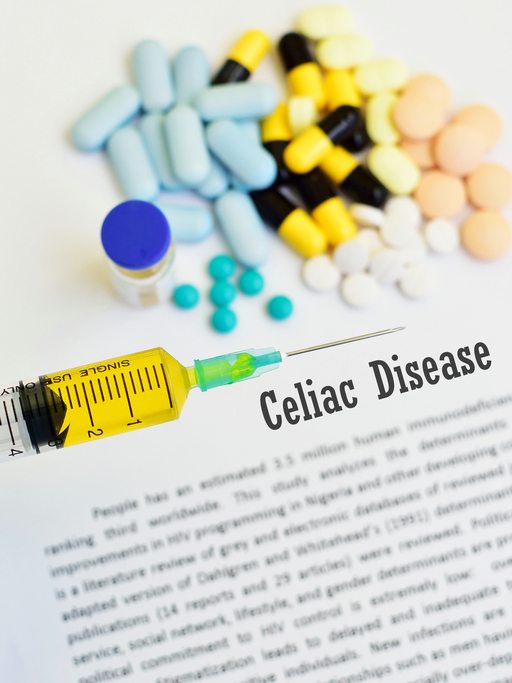 Celiac disease is difficult to diagnose, which is why it’s commonly under-diagnosed (3).

Symptoms can vary a lot between individuals, and some may have no obvious symptoms at all.

Conditions including Type 1 diabetes and hypothyroidism can also put you in the high risk category (3). 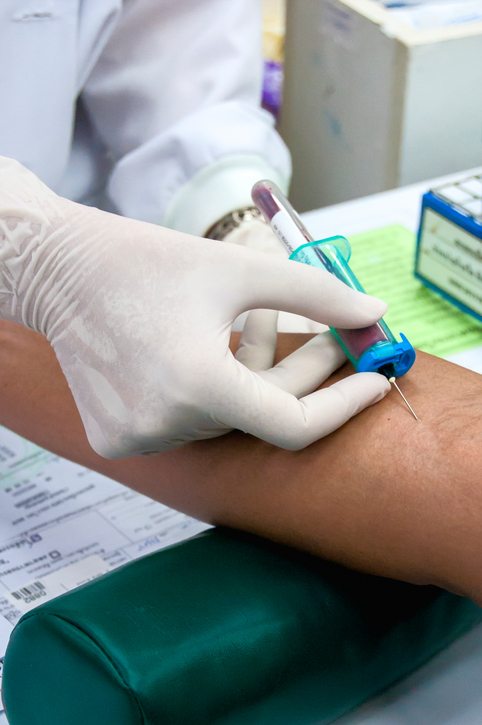 For blood tests to work you must be eating gluten beforehand for several weeks.

This is often referred to as a gluten challenge.

With gluten back in the diet, testing for celiac disease may involve:

If you don’t have these genes it’s unlikely you have celiac disease. In saying that, having the genes doesn’t mean you have the disease. The only way to be sure is from the small bowel biopsy.

Testing more than once

Unfortunately, celiac disease can develop at any time.

The trigger for the disease is a complex relationship between genetics, the environment and the immune system.

High risk individuals may need repeat testing. This is particularly important for children, as the tests can be unreliable until they have been eating gluten for some time.

Summary: High risk individuals should be tested for celiac disease, which usually involves a blood test and small bowel biopsy. As celiac disease can develop at any time, repeat testing is needed. 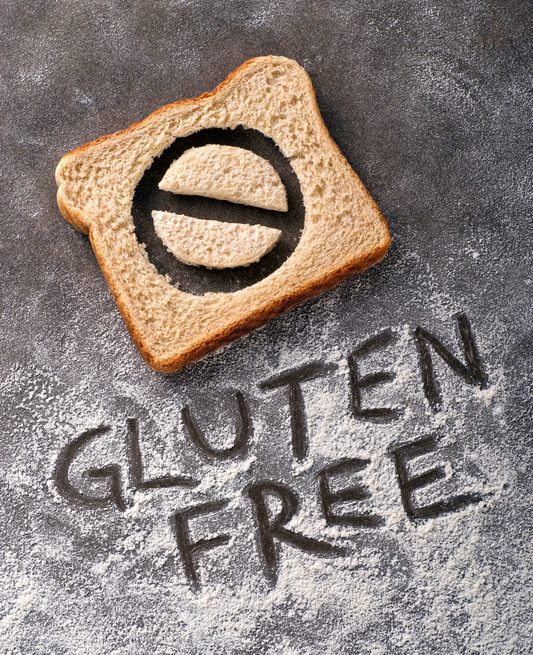 A gluten-free celiac disease diet is the only effective diet option.

Although we call it gluten-free, it’s near impossible to remove 100% of gluten. The exact safe amount is unknown, but less than 10 mg per day has been suggested (5).

In the US, Europe and Canada, a food must have less than 20 ppm (parts per million) of gluten to be labelled gluten-free (4).

Australia is stricter, requiring foods to have ‘no detectable gluten’.

Aside from actual grains of wheat, rye and barley, gluten can hide in many everyday foods.

Watch out for these gluten sources:

As you can see, learning to read food labels is important when on a celiac disease diet.

What are gluten-free foods? 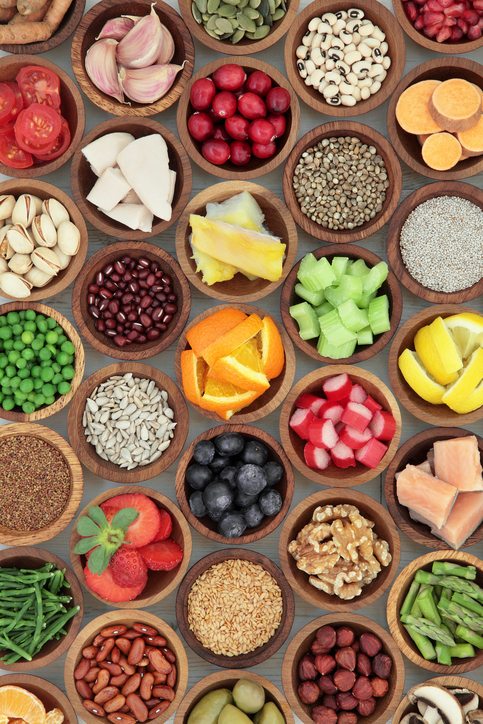 Many foods are naturally gluten free and help to create a balanced and nutritious celiac disease diet.

However, they are often cross-contaminated from other grains during the harvesting or packaging process.

For this reason certified gluten-free oats exist, which are processed and packaged on separate equipment from other grains.

Additionally, some celiacs may react to a unique protein in oats called Avenin, which is structurally similar to gluten (4, 6).

It’s best to work with your doctor and dietitian if you’d like to include oats in your celiac disease diet.

Is a gluten-free diet healthy?

Following a healthy, balanced gluten-free diet is difficult but not impossible.

A recent study found several common problems (shown in the image below) for someone following a gluten-free diet. 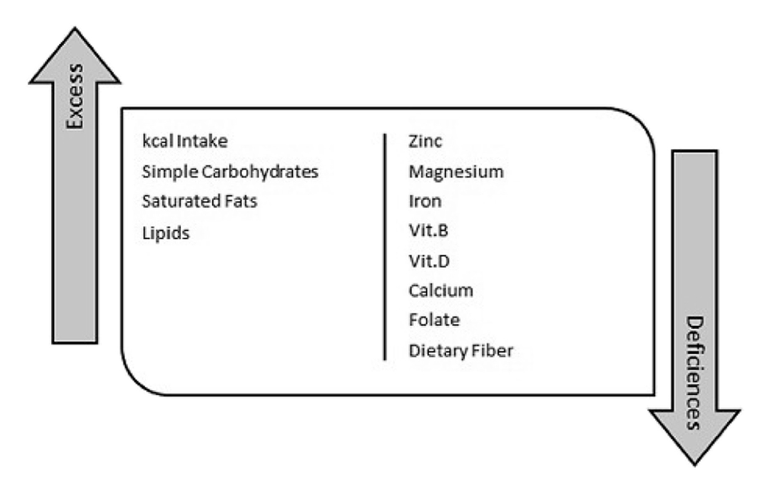 The main concern is nutrient deficiencies that can develop over time, including zinc, magnesium, iron and folate deficiency.

A gluten-free celiac diet relieves symptoms and allows the small intestine to heal.

The length of time this takes can vary between individuals, from several months to years (2).

One study of 215 patients showed that symptoms of diarrhea took four weeks on average to improve after starting a gluten-free diet (7). 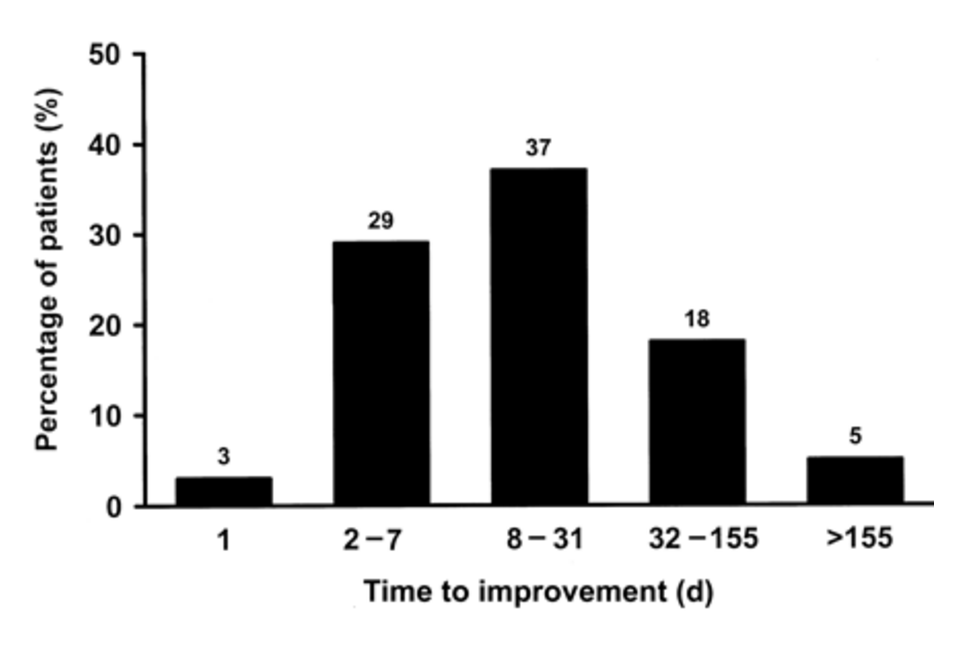 Your doctor will monitor symptoms and blood tests regularly to check for improvements.

Something as simple as sharing butter with family members who eat regular bread containing gluten could be harming your intestine, even if you don’t feel symptoms.

Here are some great tips on how to avoid cross-contamination.

Summary: Celiac disease is managed with a gluten-free diet, which allows the small intestine to gradually heal and symptoms to resolve. Gluten can be hidden in many food sources and cross-contamination must be avoided. 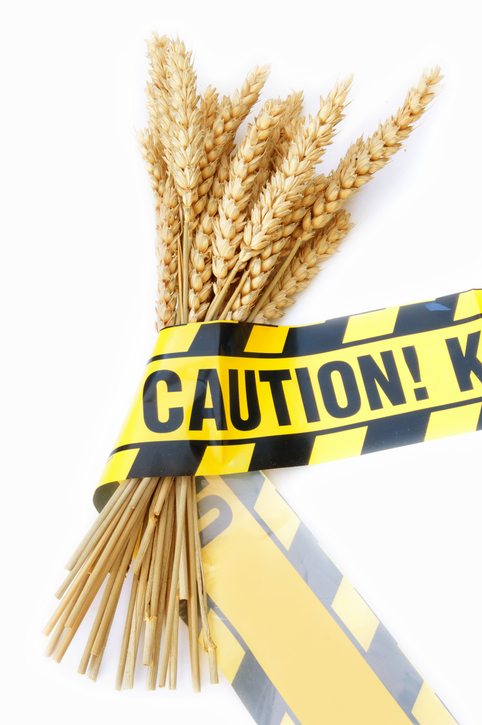 If symptoms remain on a gluten-free diet there are a few things to consider.

There may be some hidden sources of gluten in your diet, even though you think it’s gluten-free.

This is why it’s important to work with a dietitian where possible.

If damage to the small intestine remains after a strict gluten-free diet for 6-12 months, it may be refractory celiac disease.

About 1-2% of those with celiac disease have this condition, which is typically treated with immunosuppressants or steroids (2).

Summary: If symptoms persist on a gluten-free diet, working with a dietitian can help rule out gluten contamination or other conditions with similar symptoms. Refractory celiac disease could also be an issue.

Non-Food Sources of Gluten to Avoid

Aside from celiac disease foods, gluten can also be found in non-food sources including:

It’s best to check the label or contact the manufacturer.

Some medications may contain gluten, often in the form of wheat starch. Talk to your doctor about appropriate medications if you are unsure.

Where to Find More Information

If you’d like to read more, these online resources are a great start:

To interact with others that have celiac disease or for some light-hearted humour check out the Reddit forum. Just know that not all information in online forums is accurate.

As celiac disease shares symptoms with other gastrointestinal conditions, you may also want to also read one of our guides about Irritable Bowel Syndrome (IBS) or Small Intestinal Bacterial Overgrowth (SIBO) to understand the differences.